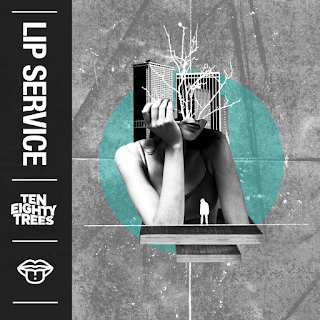 Ten Eighty Trees have come a long way in a few years, which is a great thing to see in this day and age of DJ's and Rappers.  The Alternative Rock Power-trio from Newcastle upon Tyne have been causing a storm with their live sets supporting the likes of We Are Scientists, Dunes and The Virginmarys, wooing audiences into submission and terrifying the headline acts by having to follow their energetic performances.  "Lip Service" is their fourth single, following on from "Something Feral", "Stop Asking" and "Before the Fall".


ATT: So, Ten Eighty Trees, what is the meaning behind the name and how did you get together?
Nathan: The band name actually comes from something a friend of mine said whilst he was under the influence of magic mushrooms at Glastonbury festival. Whilst hanging out with a group of Bristolians dressed as legendary wrestlers, it quickly became apparent one of my mates had consumed a substantial amount of shrooms early that day. When I asked him whether he was alright, he replied he was seeing ‘isosceles grass’ and ‘Ten Eighty Trees’. After I’d finished buckling at the descriptions of my friend’s hallucinations, the realisation dawned that Ten Eighty Trees would actually be a great name for a band. The rest is history.

The band was actually formed out of necessity more than anything. A band I was in had recently fizzled out and, unwilling to drop out of a gig we had planned, I decided to reach out to some musicians I knew, throwing together a band that could play a selection of songs I’d been working on. I knew Michael from university and he introduced me to Lewis. Two rehearsals and one gig later, Ten Eighty Trees was born.

ATT: What I like about Ten Eighty Trees is the noise behind your music, everything seems to be turned up to ten.  Also, the three-piece rock band seems to be making a big return too.  What was this a concise choice to go in the three-piece direction?

Nathan: I think that abrasive sound comes from the music I grew up on. I grew up on a diet of heavy rock and punk and, whilst my tastes have broadened and matured slightly, I think that’s never really left my song writing to some degree. Also, the idea of a three-piece band has always appealed to me aesthetically as well as sonically. Since forming my first band in my early teens, I’ve never actually been in a band that wasn’t a three-piece. There is just something so pleasing about three people really going for it on stage and creating a proper racket. The feeling of making music in this manner still gives me a real buzz

ATT: The standard question here – who have been the biggest influences on Ten Eighty Trees?

Nathan: I think Biffy Clyro have been big for all of us. Especially, for me,  the albums Infinity Land and Puzzle. The maximalism and melodic, yet twisted, nature of Simon Neil’s guitar work really influenced me growing up and I think those influences still show in songs like Lip Service and Stop Asking.

ATT: I’ve only had the pleasure of seeing you guys once supporting Dunes at the Think Tank in Newcastle.  I was standing next to Ade’s from Dunes and we were both gobsmacked, he response (and I quote) was “Jesus, these guys are good”.  So, it’s fair to say your live shows are punchy.  How do you approach each gig?

Nathan: Haha, that is extremely flattering to hear Ade said that. We are all huge fans of Dunes and their sledgehammer brand of rock is truly captivating. Our preparation for a live show is actually quite minimal. A few vocal warm ups, a stretch here or there. A pint of Cola is part of my regular routine as I, strangely, find this helps lubricate my vocal chords. One thing that is worth mentioning is that we rarely if ever have a “proper” drink before we go on stage as the biggest buzz for us is playing our music. We don’t need anything to enhance the experience for us and I think this is definitely for the benefit of the audience too. If this forfeits our rock credibility then so be it. I’m not sure how much we had to begin with.

ATT: Looking at the people you’ve supported, I must congratulate you on a very impressive list (with the likes of We Are Scientists and The Virginmarys standing out).  When you support touring bands, is there any difference to how you approach the gig?  Also, what has been your best show to date?

Nathan: We try to approach every gig the same as we’ve all been gigging long enough to know what works for us and what doesn’t. The only thing that might change is the setlist and even then changes will be minimal. We try and give as honest a representation of our band possible regardless of the audience we are playing to. I think the fact we can gig with everyone from We Are Scientists to Virginmarys shows the broad spectrum of rock fans we find ourselves able to appeal to and the fact we tend to do this successfully without drastic setlist changes is a very rewarding experience.

Though the We Are Scientists show was definitely a watershed moment for a band of relative minnows such as ourselves, a show which sticks out as one of our best is a one we played at Nemix in Newcastle around late 2017. This was before we’d even set up any social media accounts or released music and I was just coming back from a rather horrific accident. We managed to fill the room and the atmosphere inside was electric. People were singing along to songs that hadn’t even been recorded yet. I think that was the moment we knew we might be on to something.

ATT: “Lip Service” is your fourth single, which is being released on 15th February as a self-released single.  What’s the story behind the song?

Nathan: Lip Service generally concerns a widely accepted obstruction of truth, especially when used by those in positions of power.
Being heavily involved in many areas of the music industry, we have all, collectively as well as individually, come in to contact with people that ultimately reveal themselves to be brimming with hypocrisy and false promises, exploiting their supposed positions of power for further gain and treating those that actually sustain their industry escapades as expendable. Whilst numerous experiences often go into the creation of our songs, these ideas definitely came to influence Lip Service, with myself and Lewis especially having hostile run-ins with less-than-respectable characters in our respective music roles outside Ten Eighty Trees. I think many musicians active in the industry can relate to the sentiments expressed in Lip Service.

ATT: Whilst you’re only just releasing “Lip Service”, are there plans afoot to release an EP or possible an album in the future?  Also, what shows do you have coming up?

Nathan: We have a number of releases scheduled for the rest of the year with an EP on the cards toward the backend. Whilst we already have an abundance of material written and recorded for that, preparations to return to the studio are already in motion. We don’t particularly like to rest on our songwriting laurels.

With regard to what shows we have planned, we have a smattering of shows booked around April including a hometown headline show at Newcastle Think Tank on 20th April. The line up for the show is looking well-tasty and we can’t wait to share what other acts we have lined up over the coming weeks. We also have a few shows lined up over Festival season, but, again, we are unable to say where we are playing just yet. All will be revealed in time.

"Lip Service" is what I would call a new take on an old school sound.  This ode to the failings of the modern world when people talk a good game, but deliver a shit service (think Brexit if you will) is a song that reminds me of a combination of The Wildhearts, Biffy Clyro and a dash of Freddie Mercuyflamboyance.  The main riff is a thing of beauty; it'll be worth purchasing just for that alone.  However, the whole song is a total earworm, it'll be stuck in your head for weeks.  The best bit is near the end, I won't spoil the surprise, but trust me on this one!


Ten Eighty Trees are onto a good thing here, "Lip Service" is one of the most refreshing songs I've heard in an awfully long time.  If they play their cards right, I can see a bright future for them.  Thanks to Nathan and the guys for sending me "Lip Services" and agreeing to the interview as well, appreciated it!

5 out of five - I wish I had extra ears to love this more.

Top track - (As it's a one-track single) Lip Service

You can purchase Lip Service from the Ten Eighty Trees Bandcamp page here.

You can purchase Lip Service here on Amazon, but you'd be better off using the Bandcamp link.

You can stream Lip Service on Spotify here.

You can stream Lip Service on Deezer here.

You can stream Lip Service on Tidal here.

All photos supplied by Ten Eighty Trees for promotional purposes, copyright is retained by the relevant copyright holders.
Unhinged from the brain of Eddie Carter at 07:07