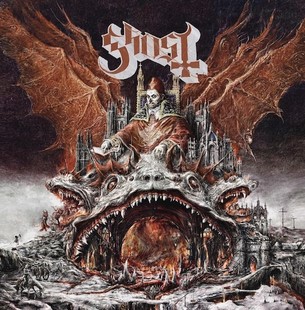 Regular readers of this blog will know that I’ve always had a soft spot for the Satanic branch of the Salvation Army (my cheeky name for Ghost).  Their first three albums are three of my favourite hard rock records, they are full of OTT drama, attitude and a fanatical devotion to him downstairs.  Now, whilst I’m not a Satanist myself, the music of Ghost has always been on the mark.  But we find Ghost at a crossroads so to speak (this review might be pun-heavy, I’m sorry).  After the release of Meilora (you can read our review here), the band fell apart as their identities were revealed due to a court case between Tobias Forge and his former unnamed ghouls.  The court battle has been dirty, to say the least, accusations of unfair dismissal and claims of hire hands being thrown both ways.  For an outsider, it’s been entertaining, if not a little sad to witness a band tearing itself apart.

However, Forge has found himself some new unnamed ghouls to back him under his new persona, Cardinal Copia.  So, everything changed, but it's also the same?  Well, that is the question here.  At the very heart of this album, if they admitted or not, is a band trying to find its identity again.  They are also trying to prove that this is essentially a solo project for Forge and he can make the music without original members Martin Persner, Simon Söderberg, Mauro Rubino, Martin Hjertstedt and Henrik Palm.  This is a release that will either cement them or sink them, so which is it going to be?

Musically, Ghost have moved on towards the 80’s hair metal phase of their existence and away from that 70’s progressive sound, they started with.  “See the Light” could have been for the most part on a Whitesnake album, “Miasma” is a song that I fully expect to hear on the next Top Gun movie, “Witch Image” is Bon Jovi at their 80’s best.  They’ve changed their style, but to be honest, this was hinted at on their Popestar EP which was released in 2016.  It’s not their biggest jump, it’s been long coming, but the transformation from their earlier form is now complete.

And yet, I still find myself liking some of it.  “Miasma” might be an 80’s classic in the making, but it’s also one of the finest instrumentals you’ll hear outside of an old ELP record or Rush collection.  “Faith” has one of the most OTT introductions since “From the Pinnacle to the Pit” from Meilora.  Ghost are still masters of the macabre drama, shouting the praises of their father below as loud as possible.

I think the main thing here is, and will always be, to decide if the album is any good.  The answer to this is no.  Here are the pro’s: Ghost have not lost the knack of writing a great tune, even after losing four-fifths of their line up.  So that is a positive straight away.  Also, they use familiar riffs to their other material, so you never feel like it’s been a wholesale change.  Here are the con’s: they are further away from the horror of old, now they are at the commercial end of their journey.  The more shine that has been added, the more mystic that has been stripped away.  A band which is so heavily based in the acts of Satan tends to thrive under the macabre, so the commercial sheen will lose it some of its original fan base.  I don’t think for a moment that they care, but that is for time to tell.

Overall, Prequelle is a disappointment and that is really the end of it.   Ghost are starting to sound tired, the OTT lyrics now sound clichéd now, the joke is over.  To be honest, their journey should have ended with their spectacular live album, Ceremony & Devotion which was released last year.  That was a fantastic document of the band at the height of its power, this is purgatory.  There is nothing here which really warrant more than one listen, which is something I would never have thought I would have said about Ghost.  It’s not the worst album I've heard, it’s just soulless and lacking spirit.

5 out of ten – Not for everyone, but played well.

You can purchase Prequelle from Amazon here.

You can stream Prequelle on Spotify here.

You can stream Prequelle on Deezer here.

You can stream Prequelle on Tidal here.
Unhinged from the brain of Eddie Carter at 10:44