The Temperance Movement - A Deeper Cut 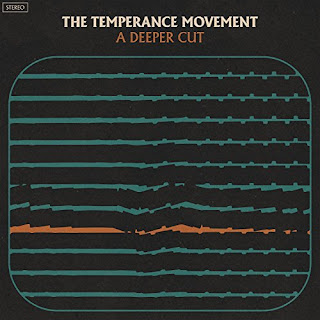 The Temperance Movement have slowly, but ever so surely, been making a little niche for themselves in the UK music scene.  Since starting with their self-titled debut, their cult-like status has grown to the point where they are starting to break out of the club circuit and hit the bigger venues in the UK.  This can partly be put down to the musical pedigree in the band, with members having previously worked with the likes of Feeder, The Waterboys, Jamiroquai and many more.  It can also be put down to the fact that their debut and the second album, White Bear, have been so warmly received by their fans.  I would love to say at this point that I’ve been a fan since the beginning, but that would be a lie.  They were a name that I’ve seen a lot, but I’ve let pass me by.

So, in true ATTIWLTMOWOS style, I’m starting with the difficult third album, A Deeper Cut.  Released in February 2018, A Deeper Cut made the top ten in the UK music charts, which is quite an achievement for a Rock band in this day and age (sadly).  So, how has this record turned out?  A Deeper Cut is, to be frank, one of the best Southern American Rock album you’ll ever hear, without originality from across the pond.  Every song on this record is a killer cut, I cannot single any out for being sub-par because there is nothing sub-par about this album.  Each track is as different as the next, you have the ballad/heartbreakers such as the title track, “Another Spiral” & “Children” which will make grown men weep openly.  You have the stompers in the form of “Caught In The Middle”, “Love & Devotion” and many others – it’s such a quality record.

From beginning to end, A Deeper Cut takes all the experiences that The Temperance Movement have encountered, built on it and released a monster!  I’ve never been so excited about a traditional Rock album in such a long time, it has that special factor which makes music my all-time passion.  A Deeper Cut is a contender for the album of the year, it’s that damn good.

You can purchase A Deeper Cut on Amazon here.

You can stream A Deeper Cut on Spotify here.

You can stream A Deeper Cut on Deezer here.

You can stream A Deeper Cut on Tidal here.
Unhinged from the brain of Eddie Carter at 18:07