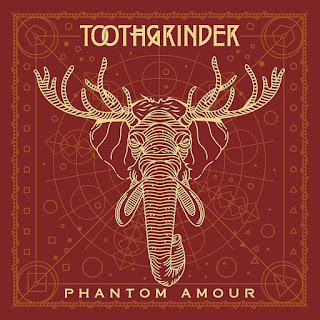 I've no recollection how I ended up hearing of Toothgrinder, I've checked my submissions and magazines I've read.  I've gone through my emails with friends and colleagues elsewhere, but I cannot find how Toothgrinder entered my life.  I have played one of their songs "Paris" on my radio show, so it must have been through that, but I still am at a loss for the starting point.  Toothgrinder hail from Asbury Park, New Jersey, USA, they have been going since 2010 and Phantom Amour is their second album which was released via Spinefarm Records.  I can only think that I liked the cover of this album, so this must be (by default) another round of cover roulette!  For people who are new to the blog, once in a while I review an album based on the cover alone, the cover to Phantom Amour is a likely candidate for this series.  So, as 2017 comes to a close, what does Phantom Amour have to offer us?

“Hvy” sounds like the love child of Porcupine Tree and A Perfect Circle, with a confidence from the band that infuses this number with a unique sound and texture that I’ve not heard in a band for years.  I was not sure what to expect when I first put this one, but I was not expecting Alternative Prog goodness.

“The Shadow” adds further depth to this album, with a huge Alternative Rock riff that sounds fantastic!  It is soon back to that electronic/prog noise and it all comes together with an ease that I thought might have been lost forever.  Two tracks in, two winners so far.

“Let It Ride” is a song that sounds as if the horizon is the goal, nothing else will do and they will be no prisoners taken either.  You feel as if this song has already eaten a huge number of miles, just to get to this form that we hear on Phantom Armour, all of which have made this a battle harden, rock classic in the making.

The title track of Phantom Armour is a song about being left to rot in the wild, losing your home, and having to move on to a world without a haven.  It’s a powerful number, that riff just after the chorus sounds fantastic.  Only the rap sounds out of place if I'm honest, but that is just down to personal taste and does not detract from the fact that this song is really good.

There is no sign of Toothgrinder letting up with “Red”, looking at the state of America and how the world is currently fucked up under Trump.  This is a massive song, with its paranoid state, to its harsh message and huge riffs/solos that sound like control detonations.  One of the best songs on the album.

“Adenium” is a brooding beast, even on this album.  This is a modern take on that most complex of pieces for an Alternative Rock band, the ballad/highly emotive piece.  Ti reminds me a blot of Bloodsimple, with its mixture of Post-Hardcore, Alternative rock and beautiful synths.  “Adenium” is a song which might be skipped by some, but it’s still one that I would recommend people listening to.

Jubilee brings out the acoustic guitar, the brushes for the drums, removing those dramatic riffs and showing that they have a sensitive side.  For some people, this will not work, but for my money, I have heard a lot worse.  It is always good to see band’s willing to try something that is different to their main material, this might be something the could explorer as a separate EP at one point, but the banjo was a touch too far.  So, decent, but please ditch the banjo.

“Paris” continues the reflective mood first brought to the forefront on “Jubilee”, with another tale of regret.  Going for the tried and tested “quiet verses, loud chorus/bridge” song, “Paris” is something that you will be familiar with to a certain degree.  But I love this one, the music is dramatic, the vocals are spot on and it’s one of my favourite numbers on the album.

“Pietà” sounds like a bomb going off after the last two gentler moments of the album.  It’s fast and furious, clawing away at the listener and sounding as if they are aiming for the jugular.  It seems to have been added at this point to make sure you’re still with them, that you’ve not drifted when the band are playing to a different emotive state.  This is best listened to as loud as possible, it also compliments “Paris” as its more deranged cousin!

“Snow” returns to that previously hinted at emotive state, with winter and snow being used as metaphors for the state of a union in disrepair.  There is a fierce independent streak in this one, a sound of someone who is preparing to cut ties with someone who is dragging them down.  It’s an interesting piece, with lots of vocals mixed so quietly in the mix, that they sound like arguments from two rooms away.

“Vagabond” is another song about cutting ties, about retribution and the repercussions of one’s actions.  There is an anger of the friend/lover scorned on this one, but the anger of the words is not reflected in the music, it feels as if there is a restraint to the music.  It’s not a bad song, but it’s not lighting the world on fire either.

“Futile” is a loud number, it’s another song for the broken-hearted, with anger add to it in a way that was missing with “Vagabond”.  It’s a song that sounds good, with a riff that sounds good, but the chorus is a little weak compared to the verses.  Another decent number, but only decent.

13 – Facing East from A Western Shore

“Facing East from A Western Shore” does everything I want from a Modern Metal song, without falling into clichés.  It brings together all the styles of the band (Post-Hardcore, Alternative Metal, Nu-Metal, Acoustic leaning) and merges them into one great song.  It feels as if a decision is being made, there is a desire for change and there is a feeling that people will be moving on soon.  I love the solo on this one, the riff is really good as well, Toothgrinder has saved the best for last on this album!

Phantom Armour has become a late contender to the metal throne as far as 2017 is concerned, with a slice of Modern Metal that mixes a bit of Post-Hardcore, a bit of Nu-Metal, with a lot of emotional baggage and a fuck load of riffs.  It’s not quite a perfect release, they do have a few too many lighter number (in a given sense of the word “Lighter”) and there are a few songs that could have been removed for an EP and it would not have changed the mark for the album.  But that is down to personal taste.  This is a brilliant album, one that I would recommend to anyone who is looking for a something different from Metal in 2017.

8.5 out of ten – Oh, now you have my attention and maybe my time, money and heart

You can purchase Phantom Armour on Amazon here.

You can stream Phantom Armour on Spotify here.

You can stream Phantom Armour on Deezer here.

You can stream Phantom Armour on Tidal here.
Unhinged from the brain of Eddie Carter at 10:02