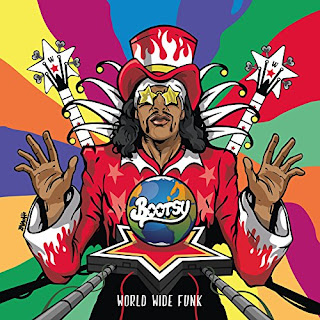 The legend of Bootsy Collins, the image of the man has long been etched into my mind.  What can I say here that has not been said before?  To be honest, nothing!  Bootsy has played with the likes of James Brown, Parliament, Funkadelic, George Clinton, Buckethead, he even lent his skills to Dee-Lite for “Groove Is in The Heart”!  In a world of imitators, he has always been an innovator.  It’s been six years since the release of The Funk Capital of the World, a lot of things have changed, but has Bootsy?

“World Wide Funk” starts with a strange introduction, talking about an alternative reality when Bootsy Collins was born out of the earth, making the dinosaurs dance and taking the world by storm.  It is silly, very silly indeed and I could not give a shit!  It is funky, bass heavy and a fantastic opening to this album.  You don’t want your funk album to start with a gentle introduction, you want an OTT beginning with high guitars, larger than life bass, brilliant vocals, a drummer that could move the dead and keys that will open all doors.  “World Wide Funk” is a brilliant opening, with a cheeky sense of humour and more bass than one song has the right to own.

“Bass-Rigged-System” starts with a sample about a secret defence budget session, then the slap bass takes centre stage, the fever kicks in and the energy explodes out of the speaker in waves.  This is a huge track, one that brings the funk and will have people dancing all around the world.  If you’re looking for deep issues, this is not the song that you’re looking for, but it’s one that you will need!

“Pusherman” is all about sex, shown from both sides of the species, with some great moments from both the boys and the ladies.  It’s not a subtle number in anyway, shape or form, but the ladies come across better on this one.  It’s more heavy bass, more funk and lots of beautiful sounds that stay with you long after it’s finished.

“Thera-P” is a song that (lightly) looks at the turmoil that some people face, how their own internal demons are the rocks which sink them.  Music is also shown to be a therapy of sorts, which is something I can understand.  This number is a bit light compared to other tracks on the record, but it’s still enjoyable.

“Hot Saucer” is another song about sex, love and every rude word has been replaced with the word funk.  It’s a song for the dancefloor, one to get the body moving and it’s stupidly catchy. It’s also one of the best songs of the year, it’s that damn good and it has not been off my player since I first heard it, hands down it’s that best song on the album.

“Heaven Yes” is one of the few tracks not to feature any extra guests, with this song about lost love, broken hearts and how heaven is the place to aim for.  It’s a slow ballad, full of those little hooks that will have you humming the song for days to come.

“Ladies Nite” is all about celebrating women, with a fantastic rap from both MC Eith and BlvckSeeds that seems to be about how they want to love all the ladies.  I think that this might work better in the club, for some people might find it to be a bit regressive, but I will leave that for other people to discuss.  For me, it’s a decent number, but not one I would reach for when looking for a shining example of World Wide Funk.

“Candy Cover Lover” is a throwback to 80’s funk, it has a soul side with some beautiful vocals by Kali Uchis, with the first joys of love being brought to the forefront of the album at this point.  It’s cheese – Prime Funk/Pop cheese at its best, and let’s be honest as well, this will put some people off by it.  Personally, I love pop-songs of this nature from time to time, this is a good example of how it can sound when it’s done right!

“Snow Bunny” is another song that is low on story, but high on dancefloor quality.  It’s a song to get the body moving, the mood set at seduction and the bass is the heartbeat of the whole track.  It’s very old-school, the choir singing is brilliant, one that keeps getting lodged in my head.  This is one of the best numbers one the album, but like the best percentage of it, this song is for dancing.

“Hi-On-Heels” is a song about a lady who is wearing clothing that Bootsy finds appeal, which is all played out on this slow keyboard heavy funk number.  This feels like an incidental number, one that is used as a bridge between numbers, which does not exactly sit well with me.  But, I’ve heard a lot worse, so I will move onto the next number.

“A Salute to Bernie” is a tribute to the late Bernie Worrell. The legendary Parliament-Funkadelic keyboardist passed away last summer, but Bootsy used tracks he recorded in the early 2000 as the basis for this song.  It’s another slow number, one that will give people a breather, a rest between the more active numbers in Bootsy’s live shows.  It’s a fitting tribute to his colleague and friend, full of sadness and mixed with love as well.

“Boomerang” is another sex/love song, I think at this point in the game there really should be no surprises regarding what Bootsy is all about.  What might make your head turn is the finger smacking bass on this number, which sounds brilliant.  It has a few different styles going on, but it’s all kept together with Bootsy’s trade branded charm and smile.

“Worth My While” is the slickest love song on World Wide Funk, it starts with a sample about how the music of Mr. Collins has the power to stop arguments, which gives way to a beautiful number about how people fall in love.  This song is one you will love or hate, there is no middle ground.  Personally, I’m still making my mind up about it, edging towards loving it, but it’s not quite settling right in my mind.

“Come Back Bootsy” see the return to the heavy funk to World Wide Funk, the bass is thumping, the dancing is in full flow and everything is right with the world.  The music is so good on this one, you can get lost in the song and not give a damn, in funk we trust!

“Illusions” ends the album on a bang!  Featuring Chuck D from Public Enemy, Buckethead & BlvckSeeds (who have both already featured on the album), which is another heavy funk song, and this is Bootsy and his band at it’s best.  Just letting music flow, showing the young bucks how it’s done and ending the album with the party still in full flow!

You don’t listen to a Bootsy Collins album expecting anything but a collection of songs about sex and designed to dance to, World Wide Funk continues that fantastic tradition and it is great to hear his funky bass in the world once more.  Yes, there are a few songs that don’t really float my boat, and yes, it could have lost a few songs.  But I still find myself enjoying the best percentage of this album, it's timeless and it has some great moments.  Sometimes you need music to dance to, you could do a hell of a lot worse than World Wide Funk, it’s my surprise of the year and I’m so happy to have found it.  Now, get your funk on!

You can purchase World Wide Funk on Amazon.

You can stream World Wide Funk on Spotify here.

You can stream World Wide Funk on Deezer here.

You can stream World Wide Funk on Tidal here.
Unhinged from the brain of Eddie Carter at 08:46