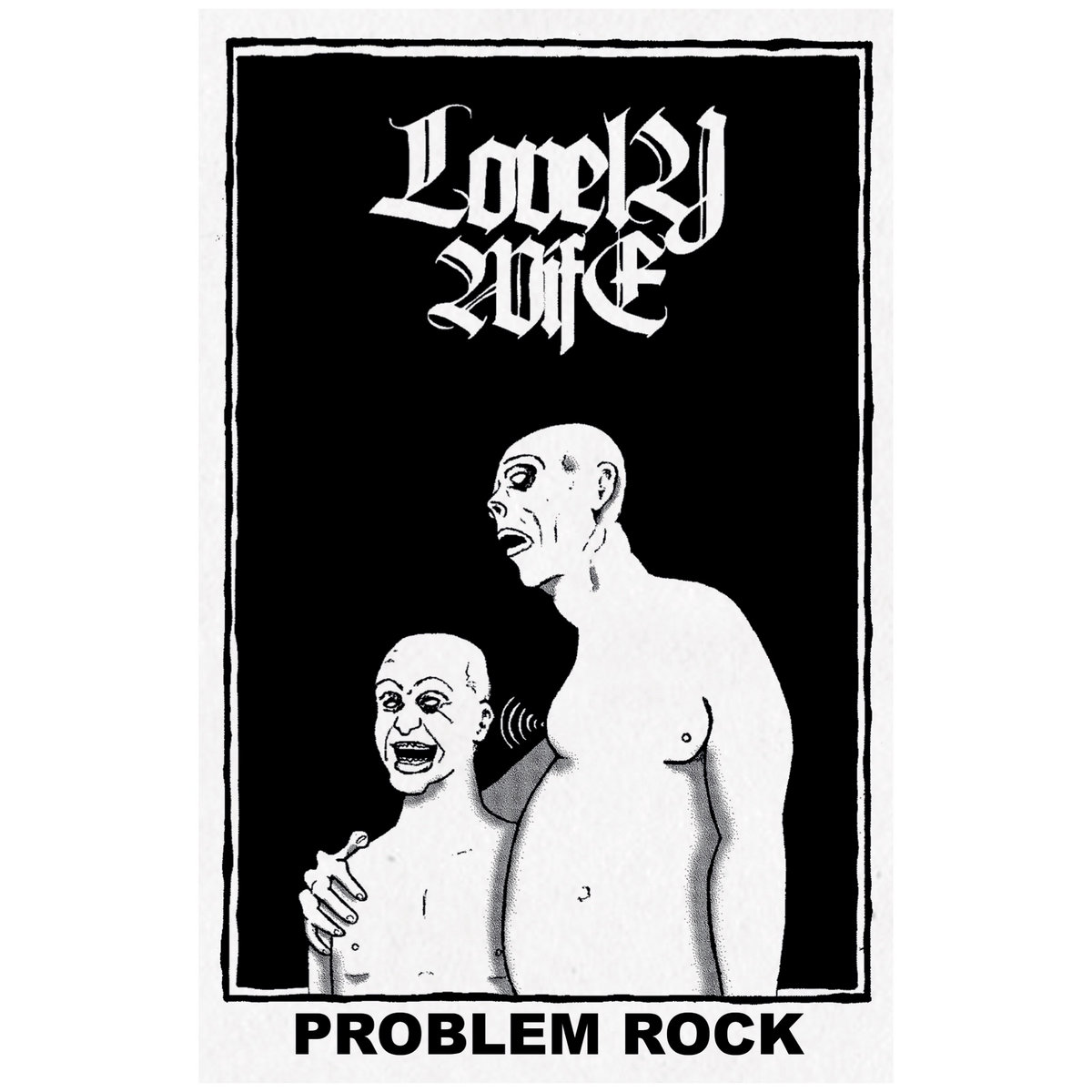 Lovely Wife are noise band from Newcastle upon Tyne, they have been going since 2011 and one of the leading lights in amplifier worship up here.  During the year, they have gone through a fuck load of line-up changes, it is the nature of noise acts and it does lead to differences in sounds each time you encounter them.  This release features three song from two different line-ups.  The first song “Export to Disk” was recorded 2014 and at that point the band was Joe Garrick, Jon O'Neill and Rob Woodcock.  “Filth” and “Ting” was recorded this year and the band is now Joe Garrick, James Watts and Skylar Gill.  They are a powerful band to see live, one that will break earplugs and cause reverb in unprotected ears from a different room.  There is something about this sort of band that I really like, they speak to something primal within me and it is my great pleasure to review Problem Rock.

Like a tidal wave of sludge noise, “Export to Disk” fills your room with reverb, your head with sonic noise and might make various parts of your body leak blood as well.  It is an endurance test with some welcome pools of noise to slip into, whilst the riffs keep the massive feedback at bay.  Then everything comes crashing once again and it sounds brilliant, with just under fourteen minutes of amplifier worship and drone goodness to keep even the most anal noise nerd happy.  It is a massive song, a towering piece of music and one that will rattle your teeth out of your head at the right frequency.

Now, I am doing the unusual step of reviewing the last two tracks together, but please bear with me on this one.  The sound quality between the two recordings could not be more different if it was trying to get an original idea into the brain of Donald Trump.  Whilst “Export to Disk” sounds massive, “Filth” and “Ting” sound like studio demo with some of the sound feeling like it has been recorded behind a wall.  I was not too sure if it was the MP3 version I had been sent, or the one I purchased, but it is the same with online versions on the Cruel Nature Records Bandcamp page.  This might frustrate a few people, I will be honest as I thought I was losing the plot for a bit.   But then I started to think about it, looking for the best way to listen to this and it is so obvious – loud as fuck with a bass heavy speaker.  The guitars are just there for fuzzy background and once you get to that deduction, it makes sense.  They are just as good and important as "Export to Disk", they are just created by a different/the same band at a different point in time, making the same glorioius racket in a different way.

This is truly a release in two halves, with two different versions of the same band, in effect it is akin to Scum by Napalm Death in astrange sort of way.  It is one of those records that needs to be played as loud as possible, making the rest of your neighbourhood either join in the party or complain as bitterly as the hipsters who live next to a live music venue that was there before their tiny, pitiful flats were build do on a regular basis (see the people who live Ouseburn in Newcastle upon Tyne for details of this syndrome).  It is like Dr Jekyll and Dr Even More Jekyll, both egging each other on to make as loud a racket as possible.  You will have to purchase this to hear it, but if you like your music to be full of noise, dangerous sound and reverb, this is the one for you.

You can purchase Problem Rock from the Cruel Nature Records Bandcamp page here.

At the time of writing, Problem Rock is only available through Cruel Nature Records and is not available on streaming sites.

Unhinged from the brain of Eddie Carter at 06:38