Ian Felice - In the Kingdom of Dreams 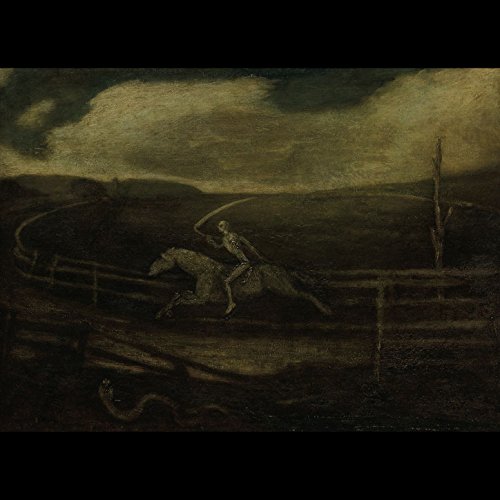 Ian Felice is probably best known for being the lead singer of The Felice Brothers, an Americana Folk band from the state of New York who have been going since 2006.  They have a staggering fifteen releases in that time, a mixture of albums, EP’s and other releases and they are currently on tour in the USA.  Ian Felice has also found time in the chaos to record and release this album, his first solo record which was recorded in four days whilst trying to escape the world of touring and some real-life dramas he was experiencing.  You may be wondering what was my reason for picking this album.  Well, the main reason I picked this one, was not because I am a fan of The Felice Brothers.  Before I picked this one, I was unaware of that back catalogue to be honest.  No, I picked this one as I like the cover.  That is right, this is another edition of Cover Roulette!  I have picked this album just because I liked the cover on the PR information which came through my email, it helps me to review something I have no preconceptions about, it means that I can be objective.  So, with no prior knowledge of this man and his work, it is time to review In the Kingdom of Dreams.

With a slow start, “In the Kingdom of Dreams” starts off this album with a tale of yearning, a desire to not wither away behind broken shells where nothing is real.  It is an image-heavy song and walks with death, it is a song that has its own voice and it also a sound akin to artists such as Bruce Springsteen and Ezra Furman.  I love the miserable experience that is at the centre of this song, it is not an easy one to like and it took a while to establish itself for me.  But it is a grower and it is truly worth the effort.

A song about a never-ending journey, trying to reach a destination that is physical, but it is also of the mind, of the heart and of the soul.  Lights on the horizon are tempting, but they are not the true destination which is further on down the road.  It is a well-crafted number, you can tell it has been laboured over every minute detail of the song.  But for such a sparse song, it feels like there is too much going on as it progresses.  It would have said more with just the guitar and vocals than with the extra flourishes that have been added on.

A song that has a protest feeling about it, so naturally the mind links to this to the sounds of Bob Dylan.  That is a bit hard for me to stomach at first to be honest, as I am not the biggest fan of the sound of St. Dylan.  But Mr Felice takes that sound that I find dull and lifeless, and he gives it a new coat and makes it bearable, charming and I applaud him for that.  For me, that is a real achievement as it is a song which ha changed my opinion on a sound style I had long given up on.  That is the sign of a great musician, well play sire on that one, well played!

With a sombre heart and reflective melodic style, we are in classic American Folk territory on this one. There is a Dylan-esque feeling to the song, which will be a big deciding factor to how much you either love or hate this song.  It is an interesting song, one that draws you in with a lamented vocal style, a performance that guides the audience through this tale of woe which it equally matches.

The misery is in fully sail on this song, with a set of vocals that are singing words of happiness and love, whilst the music is so dower that even Morrissey would ask if there was anything he could do to help Mr. Felice.  It is a miserable experience on a summer’s day, the rainbow in a storm that is still going and it sounds fragile and delicate.  I love this number, it makes my heart sore to the touch with its emotional weight and I could not be happier about it!

There is no happiness here, there is no joy and everything is broken.  It is a harsh number, one which will make your heart heavy with each passing beat and you might even start to cry for no reason what so ever.  It is a number that I would not return to that much, but I appreciate the work behind it, it is just too hard to listen to at times.

On the “Road to America”, a political picture with sarcastic remarks is unleashed and it feels like the first laugh after heartache, it is a release and it helps the listener recover after all that sombre music.  It is still a dark number, I think that is Mr. Felice’s MO, he is one of those people who can naturally on the reflective side of life and “Road to America” is a journey through the American experience and it is reflecting how it is a little strange.  At least that is how it is sound to me across the other side of the pond…...

“Water Street” is back in story telling mode (not that the album has been anything other than that), with a tale of family and reflection.  It is another gentle piece, one that keeps everything simple and it is another beautiful crafted number that sounds charming, visually based and fragile.

A journey with death that we are all on is played out here, with the Grim Reaper being all present and taunting the singer.  This song is a dark as they come on this album, there is no light coming to you at the end of the tunnel, but it is also the strongest song on this collection.  It is a song that spits in the eye socket of Death and faces it head on.  There is no escape, but there is no fear either.

10 – In the Final Reckoning

Ending this album with another tale of death and the devil, “In the Final Reckoning” is a fitting final statement for this album.  It is gentle, but full of visions and promises, it is a final waltz as everything comes to an end.  There is so many images from this song, some many words that you want to cherry pick, but if you mentioned one thing, you would need to mention the rest.  It ends this album with a sense of pain, but it also ends the album in the right tone – still walking with Death.

What an enigma of an album!  It is a strange beast that held my attention throughout its course, whilst it also made me feel as if time would never end to the point of distraction at the same time.  Before this record, I had not even heard of the Felice Brothers, so I had no idea what to expect.  What I found is a curious piece, an album that is a beautiful piece of art from a songwriter I will be looking further into.  For me, the influences of Bob Dylan, Bruce Springsteen and those who went before him are on full display on this record, but there is a strong voice at the core of this which takes those sounds and makes those the voice of Ian Felice.  It is Mr Felice’s vocal ability that sets him apart from his own influences, set him apart from my own hang ups over this genre and it is his hypnotic voice that not only sound welcoming, but they also manage to avoid sounding cliched or for purists only.  Nothing on this album outstays its welcome, there is no dead weight and it is a powerful record.  It is not an easy album for me, it is a dark collection of songs with pockets of pain to sink its claws into your soul.  But it is also a well-crafted piece of art, an album worthy of praise that it will undoubtedly receive.  For me, it has made me a fan of an album from a style of music that I have so far in my life disliked, I think that is a job well done – even if it is as happy as a rainy Wednesday afternoon in a broken café in Middlesbrough during winter.

Top track – Ten to One

You can purchase In the Kingdom of Dreams on Amazon here.

There is no solo official page on Facebook for Ian Felice, but you can follow his activities and the activities of The Felice Brothers on their Facebook page here.

You can stream In the Kingdom of Dreams on Deezer here.

You can stream In the Kingdom of Dreams on Spotify here.

You can stream In the Kingdom of Dreams on Tidal here.
Unhinged from the brain of Eddie Carter at 20:05