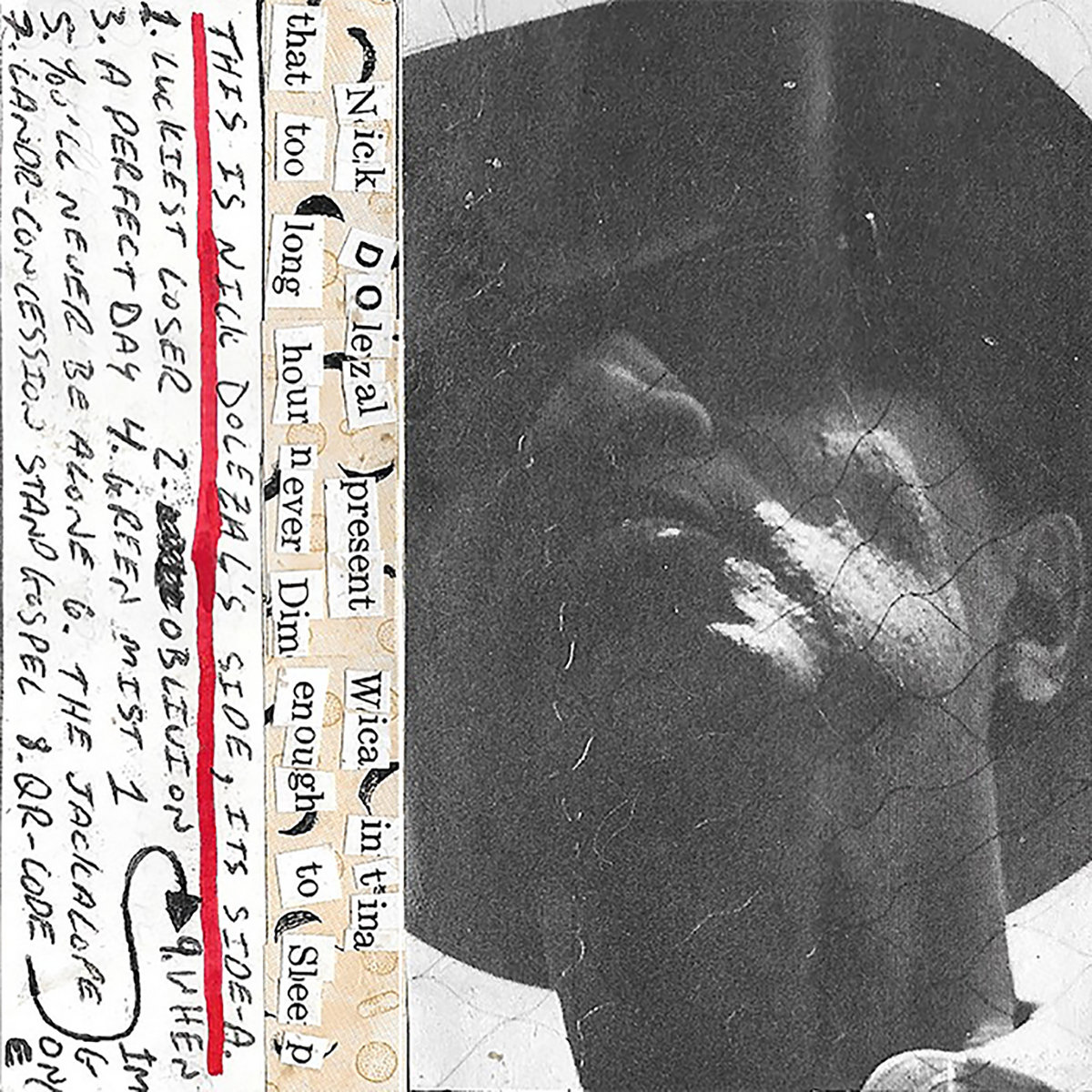 I have been tardy with my submission reviews recently, but having about 80 to micro-review has took a lot of time.  But this review is one I have been holding onto for long enough.  This a split release from Restaurnaut and Wica Intina.  Wica Intina is one of the pseudo names that Dakota Brown, resident of Tennessee, artist, musician and multi-media maverick goes under when he is not releasing music under the Sheep Bella Tine name.  Restaurnaut are a four piece from Siloam Springs, Arkansas and their music is described as Horse Music, Music Brut, Folka Dot, Lo-fi Country Hit and Experimental Decade Base......OR (as they have a different bio on the Bandcamp page to their Facebook page) it is Nick Dolezal by himself.  He is the owner of Kerchow Records in Chino, CA and his style is based his music on (and I have taken this straight from the Bandcamp page) from his ability to draw his power from being both intimate AND anthemic, kicking out simple yet freakfolktastic ditties that cannot be ignored, with all the candour, Lo-Fi aesthetic, and insight of early Modest Mouse demos and Daniel Johnston.  That is quite a boast on that one, also it is an interest concept as well that I will be exploring on this release.  The first nine track are performed by Restaurant and the remaining seven are performed by Wica Intina - time to see how they sound.

I can see the Modest Mouse comparison straight away on this one, it has a tone that would not have been out of place on 'We Were Dead Before the Ship Was Sinking'.  It is an one off recording by the sounds of it, with no rehashing as you can hear when the strings of the guitars being hit wrong and it gives it a live demo charm.  I really like this song, it is a strange little number with a bizarre and crazy rhythm that has stuck in my mind.

The beginning of this song sounds familiar from the first note, but it soon moves onto a beautifully strange and haunted number.  It floats around as the words about destruction and the shitty side of life drift past you with the feeling of an aftershock, it does sounds as if it has been created to be played after a truly loud explosion has gone off and the noise has died down.  It is an enjoyable song, in a given sense as the words are not exactly about the happiest subject.

'A Perfect Day' has a gothic feeling about it, a bit like an old English band called Dream City Film Club when they were in their minimalist period.  It is a haunting number, there is an enthral quality to the song and it could be used in an old B-movie or a Twin Peaks montage.  It is a strange number, but sadly it is a little too short which is a shame.

What a strange number, it has some bizarre percussion that sounds like it is being made from old construction pipes.  The Modest Mouse influence is prevalent once more on ‘Green Mist’ as the song progresses, it is another strange and wondrous number that keeps the audience guessing all the way through.

05 - Restaurnaut - You’ll Never Be Alone
Restaurant really do lay on the strange vibe on this one, this haunted song about love and separation is really good.  The lo-fi recording brings it to life, I do not think this would work with a full band behind it.  It is just a ukulele, some strange sound effects and a dual vocal, simple and effective.

A song about strange beliefs that people have, some of them are real and some of them are false, but it has a soft centre about believing in a loved one.  It is just over a minute in length and it is short and sweet, a bit like this review of it.

After so many solo songs, it seems a bit strange to have a full band (as minimal as it is) playing on ‘Concession Stand Gospel’.  It is much of the same for Restaurnaut here, a bizarre little number that has so many strange hooks and it starts to bleed into one constant mantra, with the audience feeling it is watching the end of the final episode of the sixties TV series ‘The Prisoner’.  It is a great song, but it keeps on looping at times.

An ode to being incompatible and have differences too vast, but this is in relation to being a QR Code and a Bar Code.  It is a strange number, but it has a charm about it with a surreal edge that makes it more than just a one-joke wonder.  The gentle guitar work is great and the odd notes in the background give it an uneven edge, I really like this one.

Restaurnaut end their half of the release with a solo work that looks at all the things that will happen when someone has left, all those little annoyance that drive the other person to distraction will be fixed and the world would probably lose a little bit of its colour.  It is a gentle number, it sounds like it has been created in absolute silence and if a pin had have dropped, it would have sound like thunder.  It is a hard ending to this section o the release, it is well crafted and beautiful.

Wica Intina bring a lo-fi element to this recording, you can hear the clicks of the recording equipment as the song develops.  It feels like the scruffy twin to ‘When I’m Gone’ by Restaurnaut, they share the same drive and timing making them a natural pairing.  A gentle start to the second half of the album.

You can hear the strings being scratched, the scrapping of the plectrum and the hiss of the air as the song was recorded.  This dark Lo-Fi song is brilliant, the background hissing, the low vocals and the bleak rhythm is beautiful.  It is a great song.

As I have never heard the original of ‘Cruel and Thin’ by Sun City Girls, it is hard for me to compare to the original.  The song drones on, rarely changing place and it sounds delightful, after I have finished this, I am going to check out the original.

This is not the happiest of tunes, but I think the title alone would have made that obvious.  It is more Lo-Fi, acoustic drone that would not be out of place on a Today Is The Day album if they went acoustic.  I think the style here, the absence of high end sound adds to the charm.

There is a change to the sound on this song, it is lacking the hissing and Lo-Fi noise that has made the first batch of Wica Intina songs so special.  It is still a good song, but I am missing the hiss on this one.

Now, I would have liked to have reviewed this song, but on the Bandcamp page it is the same as ‘Legendary Rain’.  I have no idea which is which, so I will move on to the last song of the release.

Now this is a great song to end the album on, it sorts of brings everything together.  It is another piece that will have Lo-Fi acoustic fans in rapture, it is one that keeps on giving and it brings the album to a beautiful ending.

Ok, here is the rub for both.  Restaurnaut are so heavily in debt to Modest Mouse that it hurts, but it is also done with an original flair and it sounds fantastic.  It is a project that seems to have legs and I hope that they release further albums.

Wica Intina is a joy to listen to as always, making some of the darkest pieces of acoustic music I have heard in 2017.  I love the Lo-Fi, almost Gothic element of it, the notes that are dropped, the slight imperfections that adds a natural element and help remind you how music can sound so fragile and sometimes better when it is not polished.  Sometimes music recorded in the moment is perfect for not being perfect, the imperfections are what make it special.

Together, they are estranged twins in a way, both forging their way in the world on slightly different paths and both feel as if their creators have added a lot of passion to their projects.  It is those DIY/Lo-Fi elements of this release that give it a charm that you cannot get from an album by artists like Ed Sheeran, Rhianna and other top 40 illuminati.    I love it, it has a warmth at its dark heart and it sounds fascinating.  This is a brilliant split release, one I would recommend to anyone who wants to see what else is out there.

7 out of ten – This is good and worth checking out.
You can purchase and stream That Too Long Hour Never Dim Enough to Sleep on the Kerchow Records Bandcamp page here (Both the Restaurnaut & Wica Intina tracks are available on this page).

You can purchase and stream That Too Long Hour Never Dim Enough to Sleep on the Restaurnaut Bandcamp page here (Only the Restaurnaut tracks are available to stream on this page).

You can follow the activities of Restaurnaut on Facebook here.
Unhinged from the brain of Eddie Carter at 12:17