The Darkest of the Hillside Thickets - The Dukes of Alhazred 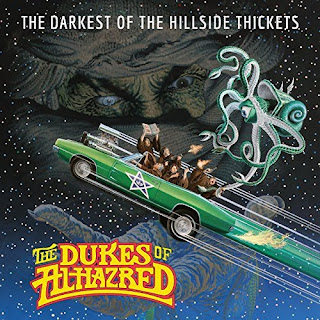 If it was not for the legend that is Luke Dunmore, I would not have ever heard of The Darkest of the Hillside Thickets!  My ex-partner in this blog has always had an eclectic taste in bands and his collection of strange and wonderful acts was always something I looked forward to (and I am sure I will still get strange ones via his many mixtapes).  The name of this band though, it stuck out so much and for good reason too.  Hailing from Chilliwack, British Columbia, Canada and heavily influenced by H.P. Lovecraft and horror stories, The Darkest of the Hillside Thickets have been blazing a trail for others to follow since the early 1990's.  It is always fun when they appear, sometimes it feels like the foreshadowing of some apocalyptic doom and this album with title/pun on the Dukes of Hazzard and Abdul Alhazred (the writer of the Necronomicon), this album will probably go one of two ways - Bat Crap Crazy Awesome or Bat Crap Crazy Awful - which will it be?

Starting the album as with a high octane, punk ‘n’ roll experience which has been making the world turn since the early 1990’s, but with their own unique touches of loonies and brilliance.  The percussion section in the middle reminds me of ‘Gay Bar’ by Electric Six, it is unbelievably catchy and as hard to shake as a wolf on your trail around midnight in the middle of the woods.

‘Arachnotopia’ is another horror punk number, this time it is all about spiders taking over the planet and making it a web-paradise for all of arachnoids everywhere!  It is silly, a little childish and I love it so much!  It has a simple riff that goes the song and it is a catchy as a web in the face first thing in the morning.  I love the way it sounds, it is so simple and effective that it is sort of surprising that it has not be created before this album.

Keeping up the good work is ‘Shhhh……...’ which is another monster/horror based number that will have you rooting for the undead and throwing devil horns by the time it has finished.  It is simple, top quality punk rock, with a load of energy and a sense that the devil is in the driving seat with a 40 in one hand and he is lightly touching the wheel in the other with no care about his passengers.  I love the end where everything is gone and the list everything you will miss, it is a quality moment on the album.

‘Coelacanthem’ is a bizarrely titled little number on this album, it is also bizarre song in comparison on this record as well – it truly stands out from the mayhem that seems to be their calling card for this album.  It has a grunge feeling, one that is firmly embedded in the early 1990’s and that the last few decades are just false memories.  Thankfully, it does sound dated as that could have been deadly for this type of song, also it is sort of refreshing to hear a song that makes you wistful and that also sounds fresh as well.  It also helps that it is more madness from TDotHT, that is always a Brucey bonus!

A sound about a disaster that happening in Boston, Massachusetts in 1919.  The actual event happened with a 40-foot wave of molasses buckled the elevated railroad tracks, crushed buildings and inundated the neighbourhood. Structural defects in the tank combined with unseasonably warm temperatures contributed to the disaster which killed 21 people, injured a further 150 and there was a loss of animal life as well.  The song is a stomping number, one that treats the subject with a reverence and it also tells the tale of the real-life horror that occurred on that day.  A history lesion that works on so many levels.

The opening of ‘A Little Late’ is one of my favourite song on this album – a tale of being dead, wanting to forefill a promise, but being dead has got in the way.  It has a brilliant rock ‘n’ roll, psychobilly feeling to some of the music, the drums are smashed with reckless abandon everything seems to fall into place here.  It has a cracking tune at its heart, a real ear worm that keeps on giving and makes that world a brighter place, which is really strange when you consider the subject matter.

A song about being washed onto an island, one where the locals are a little bit loco, but it also feels like home.  Yes, it is one of those bat-crap crazy horror stories, one where the innocent victim is not truly what they seem and they willingly fall from grace into their newfound home with a sense of acceptance.  It is another slower number, but it is not dull – quite the opposite to be honest.  It is a fun song, but again it is also in a given sense of the word fun and is one that horror fans will lap up.

A fast, sharp, two-minute burst of energy, pauses and a desperate cry for life to continue; it is a kick in the pants and it sound brilliant. It does everything it says on the tin, it is quick and to the point with a sense of irony and style!

Based on the Lovecraft short story ‘The Music of Erich Zann’, this instrumental is a beautifully crafted piece of music.  It has guitars, pounding drums, a violin (or maybe a viol) and it is a haunting piece.  The story is not played out here, but you can imagine that the black abyss is forming outside the window as the song is played.  I like its strange nature, I like the way it twists as if the black winds are howling around you and it is one of the best songs on the album.

A song about those noises which come at night, when you try to tell yourself that everything is nice and safe, that no harm will come what so ever.  It is more rock mayhem from TDotHT, they are having fun on this one and it does what you want from a band at times.  It is just a kick-ass tune, one that provides the goods in ways that other bands can only dream of achieving.

A new version of ‘Shoggoths Away’ which is based on a creature from the ‘Cthulhu Mythos’, it is a fast-paced number in the style of ‘A Little Late’ and it certainly has a good riff at its heart.  However, it feels as if this has been said before and it does not feel as essential as other songs on the album.  Not bad, but not doing much either in comparison with other numbers.

The penultimate song of this album is another horror filled number, but about a creature which could be one of multiple options (it could be werewolf, a vampire, a ghost or something else altogether.  It is a decent number, it is not straying too far from the winning formula of the album and ticks all the right boxes on the horror punk form – job done on this one.

Ending the album with an acoustic…. Just kidding, it is another horror punk number that focuses on another mythical beast (this album is actually a great education for fans of the monster genre).  It is a corking song, one that ends the album with a flourish and flair that sets it apart from a lot of average punk ‘n’ roll that is around these days.

This is such a fun album, one that does not have an iota of seriousness in its bones, unless it is about monsters and horror in general.  It is how music should be at times, when you can just switch off, let the music roll over you and learn a bit about the fucked up things that mankind have seen/invented in their own minds when off their tits on Ouzo.  It is not a perfect album, there is a familiarity to the songs by the time you get to the end that you know it could have been trimmed and been just as joyous.  But the number 13 has mystic meanings, something that should not be lost on the listener.  Overall, it is a great album with a deal with the devil attitude, some class riffs and some crazy assed themes – what is there not to love here?  Official verdict - Bat crap crazy good!!!!

8 out of ten – Oh, now you have my attention as well as my time, money and heart.

You can purchase The Dukes of Alhazred on The Darkest of the Hillside Thickets Bandcamp page here, you can also purchase the rest of their work here as well.

You can purchase The Dukes of Alhazred on Amazon here.

You can visit the Darkest of the Hillside Thickets website here.

You can stream The Dukes of Alhazred on Spotify here.

You can stream The Dukes of Alhazred on Deezer here.

You can stream The Dukes of Alhazred on Tidal here.
Unhinged from the brain of Eddie Carter at 07:10