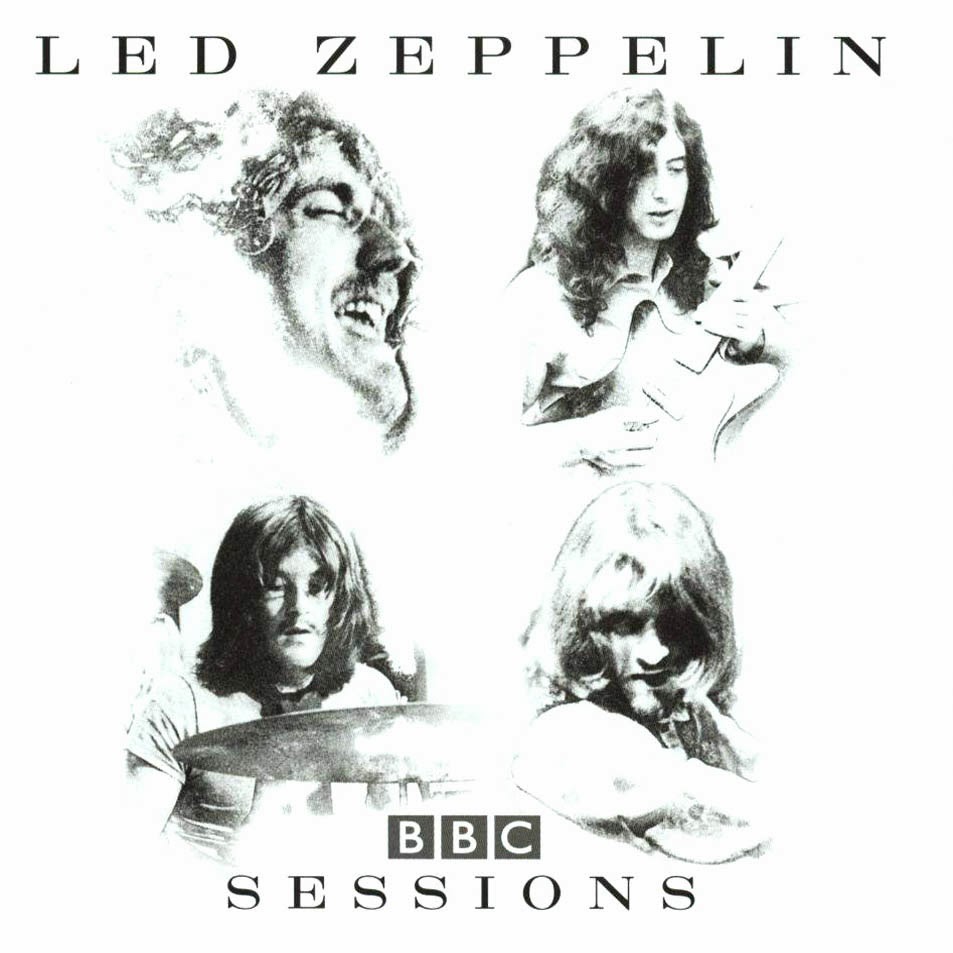 It's been a few weeks since I last wrote a blog on ATTIWLTMOWOS and this month so far has been a bit thin. So, let's go onwards, continuing with our Led Zeppelin theme following the launch of their comprehensive catalogue on Spotify. I've already reviewed their official live album How The West Was Won (read the review here on this link) and I thought it was nothing short of brilliant in terms of the quality of sound and how it seemed to reach out to each member of the audience.

Now the BBC Sessions was released in 1997, a few years before the quartet's popularity was rekindled at the turn of the Millenium thanks to a number of retro 1970s TV shows. Life On Mars as an example, and when I first heard it I thought it a slight rough diamond because the Beeb had traditionally limitations with their recording equipment that couldn't handle bands' full kaleidoscopic sounds. When The Beatles recorded A Hard Day's Night at the BBC, the spinet solo was a pre-recorded affair and multi-layering definitely was a no-no for the engineers there. The time limits on cutting the music needless to say was also a lingering factor.

Following his resounding success on remastering all the studio recordings of Led Zeppelin, Jimmy Page turned his hand to bringing the material they recorded with the national institution to cutting a record. Apparently, it was Auntie's policy neither to retain any recorded material so it was only thanks to the grace of God that a) Jimmy Page had kept all of The 'Zep's work done there, and b) they had made several appearances on the radio, six sessions in all. The kind of shows they were doing included John Peel's Top Gear (You can hear his brief introduction to Immigrant Song) and Alexis Korner's Rhythm and Blues. Now there was a man who championed blues music to the UK airwaves and Zeppelin, with their Bo Diddley and Willie Dixon influences, played straight into his hands.


All these sessions were recorded between the first and fourth albums so it's my assumption their last appearance at The Beeb was round about 1972/73 before the Houses Of The Holy album came about. The BBC Sessions showcases the musicians at their rawest and most basic level even if Auntie couldn't do them any real justice to a wider listening audience. However, it's Robert Plant who seems to excel out of the foursome as his notes in general seemed much higher and bellowsome than the studio album versions and it's clearly evident in the opening Blues influenced tracks, You Shook Me and I Can't Quit You Baby. Their Willie Dixon trait kicks things off before their more familiar pieces of Communication Breakdown and Dazed And Confused, but there are some recording flaws by the Beeb engineers as the loud introduction in the former song just couldn't be handled by the recording desks, but at least D & C keeps true to form from their other live shows, especially with the familiar bow-across-strings middle bridge.

They're trying to capture the original sound with Whole Lotta Love, Communication Breakdown (Yes, that same song is featured three times on CD one, and please don't ask why?!) and What Is And What Should Never Be. There are a few other previously unheard gems as well, for example, The Girl I Love She Got Long Black Wavy Hair and Travelling Riverside Blues, once again more Bluegrass roots shining through as well as a brief Eddie Cochran cover Somethin' Else with some Honky Tonk piano leads and backdrops before You Shook Me and How Many More Times sign off the first record.

CD Two is a live studio affair and a lot more concentrated effort from The 'Zep and I think better as well as the music is more drawn concerted effort. The live version of Dazed And Confused is three times as long as Side One's offering and puts me in a good frame of mind as it has many similarities soundwise to their Albert Hall 1970 performance. Stairway To Heaven on the other hand runs almost as a carbon copy to the album IV version although Black Dog doesn't feel as weighty and full blooded, again I think it could be blamed on the BBC's not-so-hi-tech recording equipment back then. Towards the end, the more acoustical numbers Going To California and That's The Way are propped by a Whole Lotta Love Medley, featuring a few kudos of Elvis Presley and bluesmen's works in the mix. Final track is the soulful and heart reaching Thank You where John Paul Jones is at his best on Mellotron and tracking a rare backseat from his basswork.

After hearing How The West Was Won, I always thought this offering as well as their first live album The Song Remains The Same were pale comparisons but of course as a die-hard Zeppelin fan, I'm forever measuring one live performance to another. That said however, BBC sessions is far from being a shabby effort, my only gripe is the repetition of a few songs which I've already mentioned threatens to sully of what is a strong showing from Led Zeppelin here. Another snippet you might be interested to hear is that Jimmy Page is considering releasing a compilation of tracks recorded in various different takes. Worth a punt of a listen? Only time will tell if Mr. Page does decide to give the idea a go ahead.

8 out of ten. Oh, now you have my attention and maybe my money, time and heart.
Best track : Travelling Riverside Blues.

Official Led Zeppelin website on this link
Buy BBC Sessions on Amazon
Listen to the album here on Spotify
Unhinged from the brain of Marc Richardson at 12:23