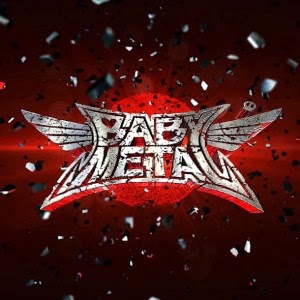 In the words of Monty Python's John Cleese, "And now for something completely different." And believe me, I wasn't exactly in a leftfield mood when I stumbled across this on a guitar tuition page, www.ultimate-guitar.com to be precise. Cue the curiosity bug going berserk. Now as many of the regular readers will already know, the majority of our reviews have all kinds of metal related music attached, some of them quite outlandish, some weird and wonderful but I believe this is the very first time anyone on ATTIWLTMOWOS has reviewed an album that marries Japanese Pop with some of the trashiest guitars to match Slayer and Megadeth. Really?

Ideas always travel well with the Japanese however unoriginal they usually are, and some fusions in life usually result in something horrific that resembles a Frankenstein monster, but with this group I have a strong suspicion I could be wrong. So now time to say a big konnichiwa to Babymetal. The three female singers in question are Suzuka Nakamoto (stage name Su-Metal), Moametal and Yuimetal, all of them as I write still barely teenagers and brought up on a bubblegum diet of J-Pop, milk and sugar. Their onstage attire is black Prom Queen dresses and absolutely nothing like KISS as the music would suggest and they're well drilled in the obligatory throwing of the Ronnie James Dio horns salute with both hands. Their skills apparently are restricted to singing, screaming and dancing and seemingly, none of them have heard of any metal acts, or any of its songs, so does this mean it's a recipe for an apocalyptic disaster? I'm taking this on board with an open mind.


Su-Metal has the lead vocals on this debut album of the same name throughout, while the other two only seem to know only holler and scream as backups while dancing around frenetically. It's a thirteen track record with most of them surpassing the four minute mark. We start with Babymetal Death and I'm not sure what to make of it nor will I suspect the remainder of this cut. There's not much vocal involved in its six minutes, in fact Su barely utters a few words if nothing else. It all starts with an angelic and perhaps haunting choir leading to a not-so-angelic blend of thrash and speed metal guitars and Slipknot styled drumming. Next track Megitsune (translated as female fox) comes all over pop-ish with pre-pubescent wails and lead vocals which sound far from maturing. However, I will concede Su-Metal sounds very technically refined and articulate.

Gimme Choko (or Gimme Chocolate) only seems to add to what's rapidly becoming a quirk filled album. It's clearly a journal of a sugar rush although once again the non-english wording on the whole record may resign this to being a cult classic. I really don't think it's ever going to upstage Joe Le Taxi. Now it's becoming even more extraordinary, Iine (pronounced Ee-Nay, and translates as It's Good) sees less guitars, more work on the decks and sounds like Mini Pops have taken over (remember that controversial C4 show?), but with still the odd Corey Taylor-esque death growl while this time on Benitsuki/Akatsuki there's more involvement from the leading young lady all through. Onedari Daisakusen seems to "borrow" a riff from Limp Bizkit, My Generation if I'm correct, but they're going right, where Fred Durst always seems to balls up!


Deathly growls are an introduction to Catch Me If You Can, while the guitars in the chorus sound punk/poplike, kind of Shampoo, backed up by Drum n' Bass. My brow is furrowing even more in astonishment. Headbanger returns to heavy riffwork although the Japanese threesome are backed up by some male roaring, apparently it tells the story of a 15 year old seeing her very first metal concert, well what else would it be about(?) Final track Ijame, Dame, Zettai, (No, More, Bullying) sounds off a clear school message as Su-Metal does begin to show some maturity in her vocals, and there's some guitar leads in the instrumental.

At the very least, I've raised an eyebrow in amazement and at best I've come to jaw dropping but I can't say for sure whether out of horror or amazement. Babymetal first and foremost is NOT a gimmick, the album runs for almost an hour yet this technically has all the hallmarks of a disasterpiece, like Jedward double teaming with Venom, or a Bieber collaboration with Sepultura (curse the thought I know). Well not quite. It still lacks the English lyricism, the sopranos' voices haven't broken yet and it's still a strictly manufactured group. It kind of reminds me of Lou Reed/Metallica's team up album Lulu (read the blog here on this link), two completely different musical entities from the widest of contrasting backgrounds. As expectations go, and admittedly, I didn't have too many when I first stumbled across this, just staggering. Not the best foreign spoken record I've heard but a strong attempt. It's a typically beautifully engineered Japanese piece but maybe a bit more emphasis on the three metal wannabes singing and less from the backup band. Thing is, will we be hearing more from these three little popster/metallers in the near future?

7 out of ten. This is good and well worth a check (with my sensible jeans on).
Best Track : Megitsune

Remarkably, the CD's available on Amazon even at this early stage
Babymetal Official site. It's in Japanese, so you'll either need to know the lingo, or use Google Translator
Official Facebook Page here
Available on iTunes here on this link
Babymetal is now available on Spotify

Unhinged from the brain of Marc Richardson at 16:04