Ennio Morricone - The Good, The Bad, and The Ugly OST 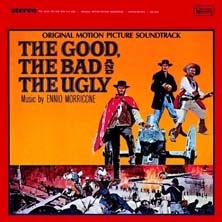 It took me long enough, but finally I found a suitable soundtrack to examine and review, which is also buoyed by the fact that The Good, The Bad and The Ugly is one of my all time favourite films. It also goes without saying a film cannot be deemed as a classic without a musical score able to consolidate its credentials, for example the Bond movie For Your Eyes Only would've been rated as one of my best ones but it was tremendously let down by the incidental music. It was just purely terrible.

Now for those of you who haven't seen or know anything about the movie in question, The Good, The Bad and The Ugly is a Spaghetti Western, so called after the Italian director Sergio Leone's take on the cowboy flick, set during the American Civil War which charts three mercenaries trying to find a Confederate serviceman's cache of gold doubloons. The score is by prolific composer Ennio Morricone who has numerous credits to his ever burgeoning resume. As well as the "Dollars" Trilogy, he has also written music scores to The Mission, John Carpenter's The Thing, The Untouchables, in fact he has been responsible for soundtracks of no less than 500 films and television programmes. Now in his mid 80s, Morricone is still actively plying his trade with no signs of slowing down save for a little less work in comparison to what he was doing fifty years earlier. In fact in his heyday he was averaging ten film scores a year.

As well as its legendary status, the main title track is nothing short of memorable. The "verses" are made up of a flute, musically personifying Blondie, The Good, the ocarina (a kind of low noted ceramic woodwind) playing Angel Eyes, The Bad and what sounds like a Native American yodelling which is meant to portray Tuco, The Ugly. The three musical entities run alongside a coyote type soundtrack while the bridge is a simple guitar solo accompanied by more Native braves chanting "The Pecos." Towards the end of the track is a brief Mariachi trumpet piece which reminds us of Texas' hispanic/Mexican heritage. The main title is featured in at least half the tracks in the OST as a running theme right throughout the film. On occasion, the coyote is replaced by the occasional harmonica and John O'Neill's whistling. Some of you may or may not know that he was "Whistling Jack Smith" famous for the one hit wonder, I Was Kaiser Bill's Batman.


Other notable tracks that break from TGTBATU title track running theme are Inseguimento (The Chase), with Tuco pursuing Blondie across the desert after being double crossed by the former, Il Deserto where the sadistic frogmarch through the parched and arid landscape ensues, and perhaps one of the biggest ironies of the movie, the downbeat La Storia De Un Soldato (Story Of A Soldier) with the only vocal ensemble on the record. I say irony because the scene alternates between the Confederate prisoners singing the bittersweet tune while Tuco is being mercilessly beaten up by Angel Eyes' henchman. From there, the music becomes more purposeful and more entwined with the film with Due Contro Cinque (Two Against Five), the gunfight scene where Blondie and Tuco take out Angel Eyes' four accomplices.

The crescendo comes at the final scene at the cemetery where the gold apparently lies with Tuco chasing for the headstone in blind panic accompanied by L'Estasi Dell 'Oro (The Ecstasy of Gold). The vocals in it are credited to the Italian soprano Edda Dell 'Orso and it's my personal favourite on the soundtrack. The trumpet instrumental sets for the tone for the tense finale, the standoff between the three protagonists. In my opinion, the scene is a bit too long and laboured, and only Morricone's score keeps the tension up and keeps us on the edge of our seats.

As I said at the beginning of this blog, the music can make a huge difference to the movie, it's obviously an integral part of the film and Ennio Morricone certainly penned what we can comfortably class is a musical masterpiece.  Or at least I can classify it as such. His proliferation in his work is without any doubt a labour of love and I've also drawn a lot of enjoyment from listening to the original soundtrack. Could The Good, The Bad, and The Ugly be his crowning glory? I can always make a good case for it.

Buy the OST here on Amazon
Listen to The Good, The Bad and The Ugly OST here on Spotify
Ennio Morricone Official Website here
It may or may not be his official Facebook page, but this details Morricone's present activities

Unhinged from the brain of Marc Richardson at 16:36