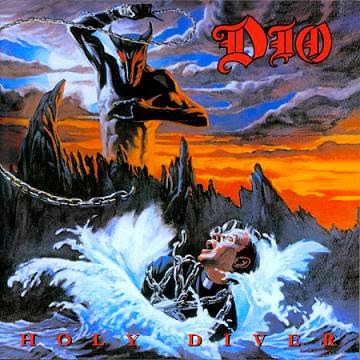 One of my all time favourite vocalists by a hell of a long way is Ronnie James Dio who by this time had already established himself amongst the burgeoning metal gods as one of the greatest. Perhaps with this in mind, his surname's Italian for God and his iconic status was reinforced by "throwing horns" onstage by raising a fist with the index and little fingers extended towards the captive audience which has symbolised a form of body language at just about every rock and metal concert. Then there was this booming but youthful American voice which belied his advancing years right till the end of his life in 2010. In fact Dio had already turned 40 when he started recording this.

Before forming his own group, RJD had already built up an impressive resumé with Rainbow and Black Sabbath after Ozzy Osbourne's sacking for alcohol abuse, but while his previous act were looking for a more radio friendly approach, Dio wanted to keep distance from the commercial pressures and maintain mystical themes of wizardry and the biblical. Dio formed about the mid 1980s and continued right through until RJD's death from stomach cancer. He brought in fellow Sabbath drummer Vinnie Appice and recruited Scots bassist Jimmy Bain who had worked with Gary Moore and Phil Lynott. The lineup was completed by shredder and up and coming Ulsterman Vivian Campbell, an inspired choice who would eventually would ply his trade with Def Leppard.

Continuing our theme, Holy Diver is their first album recorded at the Sound City Studios in LA. The album cover is also a noteworthy piece of art if a tad controversial. It features what is clearly Satan whip chaining a priest although Dio was quick to dispel rumours that he was trying to promote devil worshipping! I've already heard one or two tracks from HD and thoroughly enjoyed them, Holy Diver the title track and Rainbow In The Dark, so what about Dio's debut? Only a nine tracker but there's certainly the New Wave Of British Heavy Metal influences on Campbell introduced in the opener Stand Up And Shout. Good riffwork and fast paced drumwork even if it leans a bit heavily on Iron Maiden's Number Of The Beast. Fortunately it's made up by RJD as his New Hampshire accented vocals dominate the record like going excessive on the pepperoni on a pizza.

Next up, it's the title track. Holy Diver certainly rings all the hallmarks of classic metal with Campbell's inspirations of Blackmore evident while the whole track is one of the slower paced pieces on the record. Dio once again is out on the high 'C' notes with the following track Gypsy and by compare, it certainly smacks of Bon Scott and AC/DC and its the same in the introduction of Caught In The Middle but once again, our chorally gifted friend takes centre stage. Don't Talk To Strangers starts off with an acoustic set before Campbell's leads are a good showcase of his dexterity. I can see where Axl Rose possibly found inspiration for Paradise City as I suspect he may have already listened to Straight Through The Heart. In the instrumental break, there's twin leads which smacks of rare multi layering but the guitar harmonies do work, I certainly do enjoy listening to it.

We're moving towards the latter end of Holy Diver where Invisible begins with a peculiar psychedelia/Lynyrd Skynyrd pastiche. It's all too brief as the hard rock order takes over before we hear Rainbow In The Dark. Jimmy Bain on top of his basswork is featured in some oddball keyboards in the intro and chorus which must be said do feel a bit out of place. It also threatens to bring down the whole four minute piece but fortunately the guitaring keeps things in order. Final track Shame On The Night begins with some Deep Purple-esque wolf howls, stripped down music on the verses and Hammond keys which smacks of rare bursts of progressive rock. Campbell could certainly list Tommy Iommi as one of influences on this track as RJD devilishly laughs towards the end.

There's certainly a Rainbow/Sabbath connection and the inspirations ring true in Holy Diver but is it nothing more than recycled pieces of music? Well, not necessarily the case as Iron Maiden were just stepping up a gear and Motörhead consolidating their position as a hard drinking hard charging act. Holy Diver just came about the same time and the free reign that Ronnie James Dio was looking for away from the constraints of Sabbath and Purple was finally fulfilled. Holy Diver, now in its fourth decade may not have been the most maturing metal record and I guess that all its similarities with his fellow rock peers will forever be drawn but it's a totally listenable album on the whole and doesn't do any injustice to the vocal talents of Dio who clearly leads the limelight here.

8 out of ten. Oh, now you have my attention, and maybe my money, time and heart.
Best track : Stand Up And Shout

Buy Holy Diver on Amazon here
Listen to the album here on Spotify
Ronnie James Dio Official Website on this link
Unhinged from the brain of Marc Richardson at 11:06