Bring Me The Horizon - Sempiternal 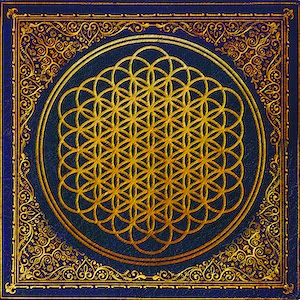 Following on from my previous comments about the threat of a rock apocalypse (read this blog of A Day To Remember here to see why) I'm reviewing a couple of acts that have genuine creative credentials, with material that just goes against the rub of the green. Sheffield outfit Bring Me The Horizon are largely metalcore which these days seems to be the staple diet of the adolescent school leaver's keen ear. However, the further you delve into their archive and their base, the more evident the proof that there's more to them than meets the speaker.

Oliver Sykes certainly has a largely primal screaming vocal range with tones comparable to W.A.S.P. singer Blackie Lawless. I've never really enjoyed listening to his predecessor, as the shock persona similar to that of Alice Cooper's has me feeling that in the hands of Lawless, rock could never mature (one or two fellow bloggers here I suspect may vociferously take issue with that). However, with the coming of Sempiternal, BMTH's fourth cut in their decade long career, it can be viewed either as an exit from their metal traits or making a couple of melodic adjustments to create a few ear pleasing garnishes to what's essentially a metal/hardcore crossover.


As separate musical entities, I love both metal and electronica, but this is one act with a genuine belief that the two genres can fuse together. In the opening track, Can You Feel My Heart, Oliver Sykes is at his throaty maximum, although the electronic programming is heavily used with the guitaring taking second fiddle here. It's not very organic I admit, but still very addictive and just about the most soulful we'll ever see from 'The Horizon. Like Mr. Sykes' high pitched snarls, the lyrical concept and power chords run on aggression, evident in the next two tracks Empire and House Of Wolves. There's a brief respite in the introduction of Sleepwalking with some piano accompaniment along with Go To Hell For Heaven's Sake. Mind you, the acerbic wording suggests the Yorkshire frontman has more than one axe to grind with a lover, or ex-lover.

Shadow Moses, it's got a killer chorus, the backup is Def Leppard-ish (fellow Sheffield rockers, by the way) with some Slipknot electronic loops in the bridges. Very compelling here, and my contention for their best track on Sempiternal, but Mr. Sykes takes a rare break from the high notes on And The Snakes Start To Sing, right up until the last couple of verses. Welcome back to the dark side ladies and gentlemen, as seen in Anitivist, a one real mean "motherfucking fuck you" song. Unapologetic and shameless, that's the most tactful I can describe it even if I get its meaning, even if I'm compelled to it. And Crooked Young is no less merciless either, it's real stab in the heart for the faithful and perhaps a sign of the last strand of the soul escaping.


If there's any ounce of the soul left in the BMTH model, then there's Hospital For Souls, with the only Jordan Fish on keyboards complementing with Sykes for the latter half of the song. It also has a thirty second oration by I'm guessing the lead singer in his South Yorkshire accent. I suspect that if there's anything to compete with the Manic Street Preachers' Holy Bible in terms of bleakness, Sempiternal is surely a serious contender, but final track Deathbed is the least raucous, the least despairing on the album here and the most soulful and reflective here. The vocals turn down an octave, with a duet contribution from Hannah Snowdon. It seems such a contradiction to the general theme of the package as a whole but it's a brief and welcoming contrast even if the threat of drowning is upon us.

For lovers of Old Skool Rock, I suspect that this will be an unwelcome offering as the programming has been a large contributor, but for me, it only adds to the flavour to an already polished steel in Sempiternal. I'm relatively new to metalcore and enjoying it so far and the album? It shows the metal streak at its brilliant best and devastatingly ruthless worst, at its most disciplined but energetic and almost unhinged. I remember last year when Eddie Carter review fellow Sheffield band Black Spiders and he completely savaged their album Sons Of The North (read their review here on this link) largely for their poor lyrics and being far too retro. Sempiternal is completely the opposite I'm happy to report and with proof with that electronica and metalcore can meld together. But best not to listen to it if you're high on endorphins.

Buy Sempiternal here as CD or MP3 format on Amazon
Listen to the album here on Spotify
BMTH Official Website on this link here
Unhinged from the brain of Marc Richardson at 11:27