Sleeper - The It Girl 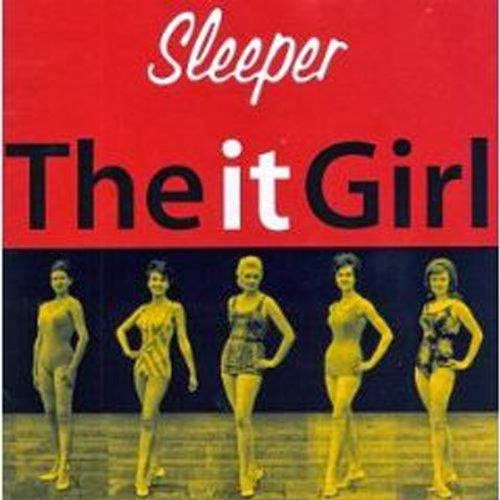 When I first reviewed Sleeper's debut album Smart (read it here on this link) last year, I enjoyed it and it certainly surpassed what I was expecting it to be. I thought it was going to be flat and maybe not as grandiose as fellow Britpoppers Blur and Oasis' crowning moment, but you know something? I was wrong and I found Smart to have a good quirkiness, charm and wit about it altogether, and while not perfect as a package in all,  Smart was nevertheless definitely a sharp and wonderful offering from Louise Wener and her "Sleeperblokes". Apparently that slightly cruel tag had a ring of irony too, if you could liken the lineup to the opposite of Robert Palmer's Addicted To Love video, with Mr. Palmer being the only male musician on the flick.

Aside from the "Another Girl Fronted Band" image which Miss Wener & Co cleverly marketed (I believe you can still buy the T-shirt) they did cut quite a lot of music given the brief five years they were together and as mentioned earlier they were looking to build on the relative success of Smart. So, The It Girl. The front cover is clearly depicting five swimsuit clad models giving a whiff of the finer things in life, the high society and purveying the Karl Lagerfeld/Alexander McQueen ideals. The theme throughout the whole record is an audio journal running through Camden Town through various days of the week. The Spotify playlist has the U.S. version for some reason and Glue Ears (available on the U.K. version) isn't on this.

Opening the scheme of things for us is Feeling Peaky, good bassline and airy narrative which generally follows on right throughout The It Girl but for me, their best track is Sale Of The Century. It's a sharp offering with some strong chord structure while Miss Wener's reaching out for a proverbial camera to capture the images of the streets. Nice Guy Eddie has introductory electronic drumming telling a tale of a mixture philanthropy and backstabbing with the subject apparently getting his just karma at the end of his life. There's more urgency in Dress Like Your Mother while the character in question is losing the punk image and obviously going out all prudish.


Stop your Crying (a loose title and variation from The Pretenders' Stop Your Sobbing) has a Boo Radleys beat but slightly disappointed with What Do I Do Now, which has verses opening with key notes sounding like an Aztec Camera hit. Please Miss Wener, don't fall into the Oasis trap of "sampling", it shouldn't become you! Here, as well as trying to ignore the faintly disguised plagiarism I'm trying to work out why in one moment Louise and her partner are going out together then in the next instant the romance has suddenly died. Weak point here, and then the next tune Shrinkwrapped starts off slowly, then begins to gather momentum in a pent up heartbreak. Not a lot, it must be said though and Good Luck Mr. Gorsky continues the late lounge theme with an air of reflection and poignancy.

The storytelling Factor 41 I found very compelling if a bit indecipherable, the guitars are more jangly and possibly the last energetic piece on the album. The semi acoustic Click...Off...Gone is a Al Capone-type narrative with some reverse recorded drumming signs off with a suggestion of someone lying on the ground bleeding. And as a whole, in summarising the album, it's a strong Britpop number from the mid 1990s, quite a few that I've enjoyed although it's not a big improvement on Smart. Still enjoyable on a hot summer's day if you're lying next to the Serpentine.

7 out of ten. This is good and well worth a check.
Best track : Sale Of The Century

Buy the It Girl album here on Amazon
Listen to the album here on Spotify
Not been able to find a Sleeper website, but managed to get hold of Louise Wener's Official Page
Unhinged from the brain of Marc Richardson at 12:11