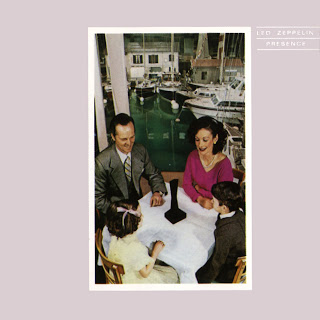 This came very close to being credited as the album that destroyed Led Zeppelin for several reasons which I'll explain shortly. But ironically as Jimmy Page puts it, Presence would, by the same sleight of hand, turn out to be their "most important" too. Two scenarios of differing contrasting extremes, so how did ever come to this? Now, I want you to try to acquire the big picture as to what was going on in 1976. Glam and progressive rock were going out of the door, their popularity was dwindling, punk was on the upward ascent and yet The 'Zep with their stadium shows packed to the rafters were at their peak especially in the United States after their tenth tour on the continent in seven years.

Then disaster struck the band. Singer Robert Plant was holidaying in Rhodes when he and his wife were badly injured in a road accident. Not only did it ruin the band's immediate plans for touring, but it also presented problems for recording Presence. While Plant's recovery period allowed him to write up some lyrics to Page's riff material, he was still wheelchair bound by the time came to recording. They were also booked in to Musicland Studios, Munich on only a three week timescale, which left very little time to record, produce and mix the album as a whole. Even by those standards 40 years ago it was a hurried job.

Compared to their previous release, the double album, Physical Graffiti, Presence only lists seven tracks, and a couple of them run for ten minutes, namely Achilles Last Stand. In terms of rock greatness, I rank this as one of their finest alongside Kashmir and Stairway, it's a weighty supercharged number with an ever thickening plot that Plant narrates throughout, it also has John Bonham at his devastatingly best in his drumwork. Would-be Page guitarists will also want to admire the memorable riffs that dominate Nobody's Fault But Mine where RP does some brief harmonica leads. So what about the rest of the album? Candy Rock Store is an Eddie Cochran homage in their rockabilly mood tracing back to one of their earliest influences while Hots On For Nowhere runs on a similar hook to Nobody's Fault although the lyrical edge is more evident with Plant citing tensions with some of his bandmates. However, I'm not entirely sold on it, nor am I with Tea For One. It sounds promising at the beginning with a couple of layers of Page's guitars, but all ends too soon as the majority of the song runs on a similar beat and key to Since I've Been Loving You.

Again, the whole affair feels a bit incomplete, perhaps mish-mash, and with the misfortunes in mind, not all of the members had the innate drive and tenacity to put their hearts and minds in the making of the record. Interestingly, none of John Paul Jones' keyboards feature in Presence and this musician's talents were seriously underused. In my opinion, they desperately needed them in the recording sessions, a result of Page and Plant's wishes to return to their stripped down, non-acoustic hard rock roots. Some of their tracks here are such an epic quality and are so memorable I would classify as rock masterpieces yet there are some where they blow their own trumpet rather badly too. With hindsight maybe The 'Zep are due some credit for making an effort and overcoming all the adversities that befell them in their darkest times.

6.5 out of ten. Now I see where you were going, but not quite there (coming from an avid Zeppelin fan).
Best Track : Achilles' Last Stand

Unhinged from the brain of Marc Richardson at 17:04