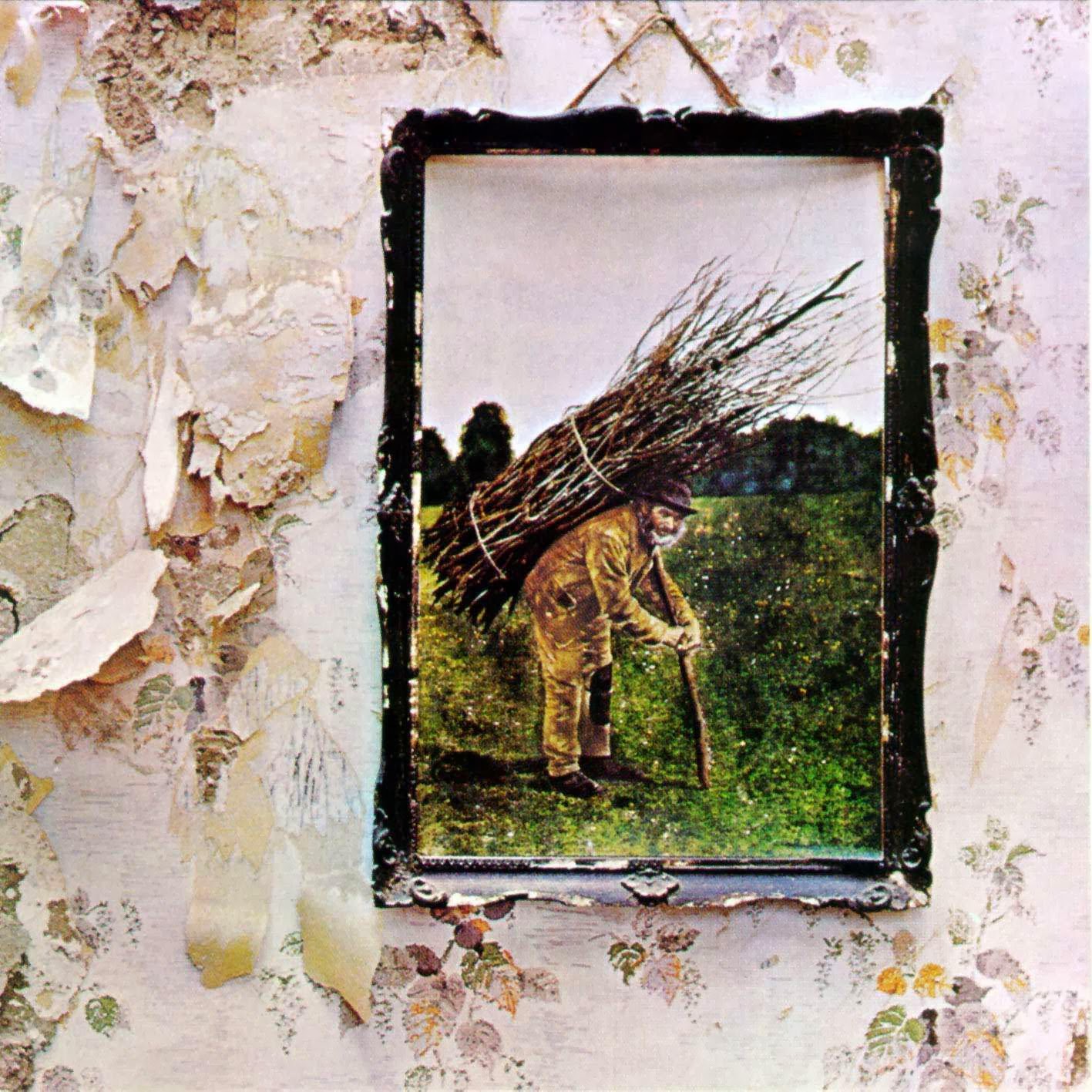 This rather iconic and what I think is a very proud and noble piece of artwork could easily be a major understatement of one of the most important rock/metal albums of all time. In typical deadpan style, Mike Myers' alter ego in Wayne's World described his pet love as "The one with the old man with a bundle of sticks on his back." In fact, track six (or side two, track two in old fashioned vinyl terms) Four Sticks sometimes has people under the misapprehension that this is the album title, along with other possible names, Four Symbols (by then, each band member had decided to design their own personal logos as their inner representations), Untitled, and The Fourth Album, only some examples from a few dozen ideas. As for the picture itself, that is an iconic object on its own. It was purchased from an antique shop and hung on torn wallpaper of property that was due for demolition and on the rear, there are Victorian derelict terraces rubbing shoulders with some typical 1970s high rise monstrosities.

Of course albums can't be judged solely by their sleeves, and after their previous offering III (read the blog here) was met with some mixed reviews from the press (and I can imagine some journalists listened to it with their jaws dropping in horror), you certainly couldn't blame the band for wanting to return to a simpler and rockier path. For the sake of brevity, I'll refer to Led Zeppelin's fourth album as IV. Not the most inspiring title I'll admit but for the casual listener and for newcomers to the foray, it's way up there in the classic album echelons, 42 years after its launch. And all eight tracks on this are just so memorable even if they have been overplayed somewhat. The most notable of all on there are Stairway To Heaven, Rock n' Roll and Black Dog which continues the subgenre of "cock rock" where Whole Lotta Love left off with its very suggestive and blatant cravings for sheer unadulterated lust. But behind the hip thrusting thinly disguised innuendos lies one of the most cleverly structured songs ever written. A simple Robert Plant acapella followed by the other three entering the song with some straightforward John Bonham beats and a riff that comes in hairy chested and gung ho. What makes it even more special is that Bonham, John Paul Jones and Jimmy Page all have to come in at the same second without any reference point, although if you listen carefully, you can just about make out what suspiciously sounds like a drumstick giving a cue.


Rock n' Roll says it all. What is basically a three chorded written twelve bar sequence with Plant yearning for the nostalgia and it would be more or less the 'Zep's only attempt on such a song. The accompanying piano isn't played by Jones, but by sessionist Ian Stewart who also collaborated with acts like the Rolling Stones and George Thorogood. Track three is the mandolin and acoustic filled folk number The Battle Of Evermore, where vocals are shared between Plant and Fairport Convention's Sandy Denny and could easily be Ramble On part 2. Thankfully, it's thoroughly original in its own right, although the lyrical content once again smacks of a Tolkien novel, even if there's no reference to Mordor or Gollum this time. Then, the most famous of the lot, Stairway To Heaven. Well, for a kickoff, it's not a love song, nor is a continuous narrative but lyrically seems to follow on where Evermore left off with its grandiose fantasia. It's certainly a statement of intent, where a few weeks into the recording, Page hinted to a journalist that it could run long at a possible fifteen minutes. The introductory six string solo accompanied by Jones' keyboard and recorder solos which bears a lot of resemblance, maybe a bit too much similarity to Spirit's instrumental Taurus. Then beats come in midway through until a two minute solo on Page's Fender Telecaster with Plant at full strength in his bellowing for the final piece. Interesting to note that on its first performance in Belfast twelve months before the launch of IV, no one in the crowd really got it, and possibly one or two onlookers became disenchanted with it! But then again, Bohemian Rhapsody got the same kind of reception initially.


Side two is where Misty Mountain Hop starts, all summery, Mellotron and Gibson backed but behind the airy feel of walking through Chicago's Lincoln Park on a hot sweltering day, lies some mischief. Apparently Robert Plant put wording into this after being apprehended by police for "loitering in the hours after dark in Hyde Park". Very amusing I thought, but then the mood turns darker with the heartbreak penned Four Sticks and some drum work that feels very original. In fact, Bonham is giving his snare a very rare rest and is concentrating solely on the hanging and floor toms with two sticks in each hand, hence the title. It also feels like a hint towards "stop everything now!" Rare basic acoustics are shown in the gentle and mandolin accompanied Going To California, and it's a rare change from what is essentially a hard rock/metal album, with Robert singing, "To find a queen without a king, they say she plays guitar, and cries and sings" apparently a small homage to folk legend Joni Mitchell. Then, the final track and my personal favourite of IV, When The Levee Breaks, which could easily be a precursor for sludge metal and all forms of rock from the Deep South. The heavy resonating drumming takes centre stage, backed up by slide guitar and the occasional Plant harmonica. Another blues influence of Zeppelin as it was originally recorded by Kansas Joe McCoy and Memphis Minnie, her name belated appeared on the writing credits obviously to stave off any lawsuits of plagiarism.

Nowadays the term masterpiece tends to get thrown about all too often when classic albums are reviewed. And as the years roll by, their stature grows and new audiences become enamoured with Led Zeppelin, it's getting increasingly hard to imagine what it must've been like at the time of its release. Brilliant and a kaleidoscopic wonder, that's all that I can say about this album and it would've been the pinnacle of the quartet's career, but thankfully not as they had a few more aces in their hands for the next few years to come. Haven't listened to it yet? It's in Robert Dimery's 1001 Albums You Must Listen To Before You Die, the book title couldn't be any clearer.

10 out of ten. This is proof that there is a God.
Best track : Stairway To Heaven