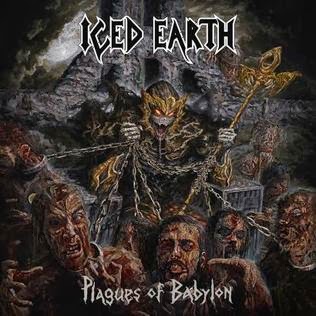 I'm bordering over whether the launch of this album was 2013 or 2014. According to Wikipedia, the official release date was 6th January, so this if this does well, we will certainly include it in the shortlist in twelve month's time! Usually, for the music industry at this time of year it's a quiet part when everybody's just overcoming over the Christmas cheer and excesses, where abstention becomes more prevalent and now I see there's a new charitable thing called Dryathlon. I'm not too sure on that as when it finishes and people drink to celebrate their success, the bodies react badly to the adverse changes. But hopefully your ears won't be starved of new music as here at ATTIWLTMOWOS, we've already found several new albums, some waiting to lift off very soon, so a case of the old adage watch this space.

Iced Earth I will admit isn't one that rolls off my tongue so easily and this time two weeks ago I never heard of them. But the other day I decided to listen to a few tracks on Spotify and my first thoughts on their music were of intrigue and certainly vetted interest. An encouraging nod from me so it's a good bet they're worth an hour's listening. What about the band themselves? Originally from Tampa, Florida, and formed round the mid 1980s, Iced Earth have been brought up on a staple diet of Metallica, Megadeth and of course the New Wave Of British Heavy Metal. There's even rhythmic structures comparable with Iron Maiden's, and all is evident in the opening and title track. However, it all begins briefly with some doom metal trait before some urgent guitarring before settling into a solid firm rhythm. The harmonies, if somewhat rather falsetto, feel old skool too, in fact they feel not dissimilar to that of Uriah Heep or Queen. There are some guest backup vocalists on all the tracks, notably Michael Poulsen and a certain Symphony X singer in Russell Allen. Obviously chordsman and mainstay member Jon Schaffer has friends in high places!


Next track Democide (curious title though) continues on the same note and some strong Dave Murray/ Adrian Smith-esque shredding before again settling on a strong pacey beat. The Culling becomes a little less Brit metal and more Kirk Hammett-type axing while lyrically the tune continues with the horror fantasy themes of the preceding tracks. It gets on more familiar American terms and perhaps a little more groove into the cut although the Anglicised guitar leads on the breaks does actually complement very well together. The staple diet continues with The End? with its pre-Apocalyptic narration and with possible cause not to despair just yet. However, it does feel as if it runs off the same key as Linkin Park's In The End. Following that is the beat changing Among The Living Dead featuring German singer Hansi Kursch of Blind Guardian fame. If I Could See You is probably the most radio friendly on the list with its rare slowed down beats and a little less thrash included while Cthulhu follows up with a good multi layered backup chorus of various vocal ranges and scene setters in the writing.


I'm certainly enjoying listening to Peacemaker too, which is clearly a tale of the Wild West and the title refers to the gun at the side of the vocalist Stu Block, although it suspiciously sounds like Russell Allen providing some strong backup if not taking the leads on this one. And for me, Spirit Of The Times is another memorable number, here Shaffer brings up the vocals here with a weighty approach but strange to see that Highwayman isn't included on the Spotify list. It's a Jimmy Webb cover where Danish voiceman Poulsen sings the verses with the Symphony X frontman taking up the choruses and the bridges. Apparently this derives from a Country/Western number and while I've not heard the original yet, it's a good bet that it's a far cry from Mr Webb's roots from The South.

The Outro is nothing more than a slight wasted afterthought of 25 seconds, with several bandmembers shouting "Fuck your couch, motherfuckers!" But doesn't take away from the quality of this record. Plagues Of Babylon certainly gets good raves from me. Not too much difference between now and what we were listening to from the mid 80s onwards, Iced Earth are just sticking to the tried and tested formula of simple stand alone songs rather than taking the difficult path of doing a continuous narrative right throughout. But even having several guest musicians still doesn't take away of what is essentially a well polished prog metal record. I'm just hoping we'll have more similar stuff to gorge our ears on at as 2014 progresses.

8 out of ten. Oh, now you have my attention, and maybe my money, time and heart.
Best track : Cthulhu

Iced Earth Official Website on this link here
Buy Plagues Of Babylon on CD or MP3 here on Amazon
Listen to the album here on Spotify (Highwayman unfortunately is excluded from the list)
Unhinged from the brain of Marc Richardson at 15:26