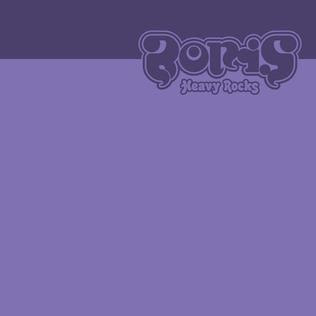 Now I have a big soft spot for this bad; I was introduced to them by Mike Potts from the wonderful Waheela many moon ago, I thought they were ok and I just left them to the side so to speak.  Not because they did not impress me (they are one of the most interesting band's I have ever came across & also one of the most diverse), just that there is a lot of music out there.  However, as mentioned in my review of 'Pink' (cleverly linked here) after seeing them in Newcastle at The Cluny (a really good, but expensive bar) I fell further under their spell.  Indeed, whilst 'Pink' is a high water mark for them, they have always tried to be different on each album.  Yet with this one they went backwards or they looked back for a change.  This is the second album to bear the title 'Heavy Rock' the original was released in 2002 and had an orange cover; however everything else is the same.  So for one of the most progressive and evolving band to look behind their shoulder is a little strange to say the least, was there trouble in the waters?

Starting with "Riot Sugar" they have given themselves a high bench mark to aim for, it is the perfect combination of sludge, stoner, amplifier worship and rock sensibilities that makes for one of the best songs that was released in 2011.  At the time, it was released as a free preview track on Amazon in the UK which was really strange.  Brilliant for people who love free music, but still a little strange that it was given away for nothing; more than likely because it was the first song on the album. "Leak - Truth, yesnoyesnoyes-" could not be a bigger contrast if it tried.  It is a perfect combination of cop theme, feedback and duelling harmonies.  Then they drop the speed ball that is "GALAXIANS" with its haunting melody from something like Slowdive, combined with the speed metal drumming and guitar work from a Motorhead album. "Jackson Head" is after this which is almost techno in places, but with a frantic guitar work in the background and shouting vocals it keeps the good pace going on.

Then they change the everything on its head with the slow burning, building and epically subtle trappings of "Missing Pieces"; for the first five minutes it slowly build piece by piece until it releases itself onto the world a tremendous pieces of feedback and a guitar solo.  It is like being serenaded by a beautiful rock band only for them to take off their masks to reveal the noise monsters underneath, then they take the masks off again to reveal the beautiful rock band again - brilliant! "Key" is a strange piece of noise and feedback which is over too soon for me.  Strange and fleeting is the best words for this one.  "Window Shopping" is next with a straight forward approach to the rock song, all energy and stomping with its aim set to make everyone jump up and down, it is ends in a blaze of glory and noise much fitting the end of a Bond villain.

"Tu, La La" is more mid-paced as far as this album is concerned, not a bad piece of work and would be a perfect driving song.  It just goes to show how varied these guys are in places as this is something that at one point I would not have expected from the people that created 'Absolutego'; however now I know differently.  And the band do it again on "Aileron", another twelve minute drone/stoner/sludge worship session that makes the bones shake and the head cry in ecstasy and agony at the same time.  It is a high point in an album that towers like a mountain range.  Ending the album is "Czechoslovakia", now depending on which version of the album you get to hear it will either be 1:36 in length or 5:46 in length.  On Spotify and on the copy I have, it is unfortunately the shorter version and this is a shame as it starts off absolutely crazy, I mean bag of frog crazy and boy is it good and the full version is spectacular.

This is an exceptional release from this band.  In 2011, they released three albums all with different styles and some of the tracks were reworked for each of the releases (to some interesting results), with 'Heavy Rock' being the most heavy of the three.  This is a great release from Boris, truly original and it is even more accessible than 'Pink'. It is just further proof that Boris are one of the most original band's that have ever (and will ever) exist.

You can listen to the album on Spotify here, but there are no Deezer link guys

Here is a live recording of "Riot Sugar"

Unhinged from the brain of Eddie Carter at 21:38