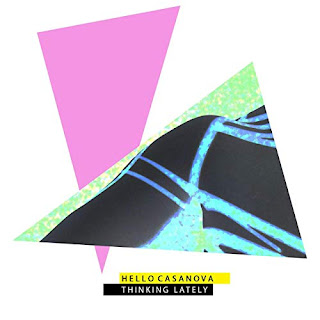 Long time no see to Hello Casanova! It's nice to hear from the likely lads from Armagh, it's been far too long. Anyway, Hello Casanova have released their new single called "Thinking Lately" n 1st February, which follows up their album Daughters (which I didn't even know was released!!!!).  As this is a one-track single, it's going to be a bit of a short review in some ways, but not in a bad way.

"Thinking Lately" is a song that seems to step back from the Pop-punk of "I Don't Wanna Talk About It", bring in a lighter, brighter musical sound.  To be honest, they could never be mistaken for Slayer, but I sort of loved that Pop-punk sound of their early stuff.  I'm also loving the sound of "Thinking Lately", as it's a superb piece of Power-pop that seems to come so naturally to lots of bands from Northern Ireland.  This song about needing space and distance is a brilliant contrast of light, bouncy music and some rather dark lyrics.  I always tend to fall head over heels for songs such as this, it makes my world spin along quite happily.

I can hear a lot of early '90s such as Laxton Superb in this, with a mixture of Carrie as well.  I'm not sure that they've ever listened to these bands, but it's amazing how sounds sometimes come back around.  "Thinking Lately" is a brilliant single, a reminder that not all music needs keyboards, synths or a DJ remix.  Sometimes, all you need is a band who can make sunshine out of thin air.

4.5 out of five - This is really good, well worth checking out

Here is the video for Thinking Lately


You can purchase Thinking Lately on Amazon here.

You can stream Thinking Lately on Spotify here.

You can stream Thinking Lately on Deezer here.

You can stream Thinking Lately on Tidal here.
Unhinged from the brain of Eddie Carter at 21:20