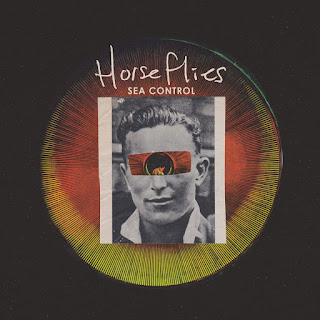 Horseflies are an Alternative Punk band from Portsmouth, and according to their Facebook page (and I'm quoting here), they swinging between a punk rock dance party and a paranoia-filled late night horror soundtrack listening session.  That sounds like a lot of my youth if the truth is told, but enough about me.  Sea Control is the second album from Horseflies, following on from their debut, These Halls Are Now Haunted.  I would be telling fibs if I said I knew about them before I received their email, so I'll not be doing that.  What I will do instead, is start my review.

Starting off Sea Control is “Waxwound”, and automatically I’m hearing sounds that are familiar to me from years past.  If Horseflies aren’t influenced by the works of Ian McKenzie from Fugazi/Minor Threat, I’ll eat my hat.  “Waxwound” is a Post-punk that is based on a simple rhythm that slowly builds, with sparse explosions of sound.  It seems like the band are awaiting an explosive kick-off, which comes briefly in places, but there is a feeling that there is more going on underneath the music here.

“Video Nasty” is another Post-punk number that deals with how the futuristic nightmare dystopias of the video nasties of years gone by have slowly became a modern reality.  I love the tone of this song, it’s dark and sinister with a hint of manic energy which is quite hostile at times.  I love this sort of song, it combines fear, drama and horror into one hyperball of venom.

“Modern Mind” adds a hint of early 90’s shoegazer to their Post-punk ethos, with some gentle female vocals being added to the mix.  The main vocals are still biting, so Horseflies keep their edge on that one, but they manage to mix the two-separate style without making it sound like a cluster fuck.  To me, that is something that deserves applauding, as I’ve heard it attempted before and it has not always been as good as “Modern Mind”.

“The Slow Choke” is another song which leans more towards the Indie aspects of Horse Flies, with the first clear vocals of the album.  There is a contrast to this song, it swings between aggressive indie to unhinged lunacy and both are equally important.  It’s an old-school song that has been given a new coat of paint, but it’s also a grower that gets better with each repeated spin.

“Sea Control” is a slow, instrumental track which has a reflective spirit.  The build to the release is done brilliantly, but once it’s there, it ends suddenly and there is no return to the previous theme of “Sea Control”.  Whilst it cuts off the track at its peak, the overall theme & quality of the music is impeccable.

“Sea Focus” is very much the acoustic twin to “Sea Control”, with an acoustic guitar being played gently as samples of sound are played in the background.  Whilst (much like “Sea Control”) it’s another short song that seems to be cut off before its theme have fully been explored, could it have been joined onto “Sea Control” to make one long piece?  Just my own thought there, but both seem to be compatible in my mind.

“Make It Look Like an Accident” brings back the Post-punk sound to Sea Control, with this short & sinister track.  To be honest, whilst it sounds great, it ends just as it starts to get interesting.  It’s good, but it’s another song that could it have been given further room to breathe.

“Jill Kester” mixes the Post-punk sound once more with lighter tones of indie to create another aggressive number that sounds as if Horseflies are playing out of their collective skins.  There are some deep emotions on this one, all wrapped up in an old-school tune that mixes Post-punk sensibilities with shoegazing guitar sounds.


“Nailhouse” goes back to a straightforward Post-punk sound, with an intense feeling to the song structure and a large degree of apprehension to a certain degree.  It’s one of those numbers which has that tone which makes the hairs on the back of my neck stand on end, but all in a good way.  I love the way it sounds, it’s one of those numbers which keeps getting better with each spin.

“Statues” begins with a piano being played quietly, sounding slightly distorted in places and as if it was recorded two rooms over.  There is also the sound of a radio/telephone call in the background, one which is just on the edge of hearing.  It’s nice enough, but over very quickly.

“Vampire Shift” is a song which is mostly instrumental, until the end when the refrain of “I’m so lonely, on the vampire shift” comes drifting over the music.  Musically, it starts off with the quiet sound of the band, then the band take it up a gear and it starts to bounce around your head.  I can identify the feeling of loneliness that is spilling off this song, anyone who has worked that nightshift in their life will get this.  It’s another song which gets better with each repeated listen, one of the best on this record.

12 – The Sound of Two Eyes Opening

“The Sound of Two Eyes Opening” brings the curtain down on this album with an old-school feeling (once again), but this time its one that sounds like Ned’s Atomic Dustbin instead of Fugazi.  You can imagine people jumping around to this, it has that aggressive energy that gives it a spark that will ignite.  I love the way this song sounds, it’s definitely something I can say is my type of song and brings down the curtain on this album in style.

Sea Control is an album that has roots in the past, but those roots have been dragged bang up to date with an aggressive explosion of sound and social commentary.  There are a few songs which could be expanded, especially the songs which aren’t overly aggressive in tone.  Those sounds are primed for expansion, but this is just my opinion.  But that doesn’t mean that quality of the music is being questioned, I found the music of Sea Control to be on point.  They sound great with a mixture of aggressive indie and Post-punk sensibilities, something that has been missing from the music scene for a long time.  Sea Control is a good album with some strong numbers, Horsefiles are a band that you’ll want to be keeping an eye on going forward.

8 out of ten - Oh, now you have my attention and maybe my time, money and heart.

You can purchase Sea Control on the Horseflies Bandcamp page here.

You can stream Sea Control on Spotify here.

At the time of writing, Sea Control is not available to stream on Deezer or Tidal.
Unhinged from the brain of Eddie Carter at 21:00