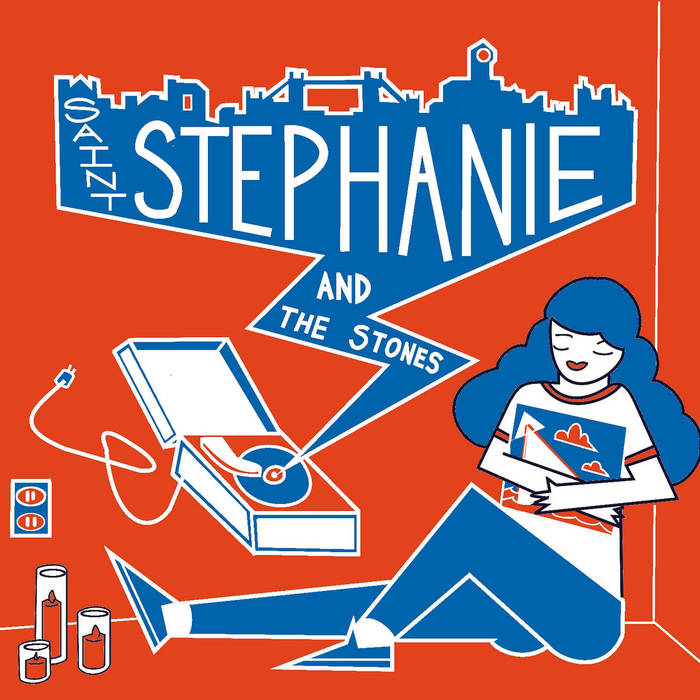 It has been about two years since we last heard any new music from Braddock Station Garrison, so it is always nice to see that a band is still going.  Their last album 'A Hint of Recognition' (our review cleverly linked here) was an admirable album that attempted to create a new slice of alternative/heartland rock it successed in doing that.  It was also refreshing to hear an album that was not pro-tooled within an inch of its life.  They have followed it with the delightfully titled 'Saint Stephanie and the Stones' which was released on 7th April 2017.  Now, I have had a bit of a delay in posting this review, but better later than never.  So, without wasting anymore time, here is the review.

Starting this album is a song which could be defined as an old-fashion rock song, but that would be doing it a dis-service.  ‘Mayday’ has a classic American alternative college rock sound (think Gin Blossoms, early R.E.M. and Toad the Wet Sprocket for reference points).  It is not a complicated song, but sometimes that is what you require – a song that just sounds good and this song is certainly a good one.

Continuing that slow, alternative style, ‘Popular Russians’ is another song that keeps things very simple, very neat.  It is not making aggressive right angular metal, it is a solid tune that continues the good work of ‘Mayday’.  It is medium paced, it has a good riff and all the band sound on form.

03 – Citadel of the Plaines

Slowing things down and focusing on the acoustic guitar, ‘Citadel of the Plaines’ is a slow number that reminds me of the work of Peterlee band, The Rye who were around in the late 90’s.  It is a passionate number that drives forward the album, it has a gentle presence and it makes me smile.

Moving into the 60’s on this song, Braddock Station Garrison have a song which is directed at lady who is always wanting more than her fair share and nothing will ever be enough.  Once again, it is a decent number, not doing anything wrong.  Basic and enjoyable, what is there not to like?

05 – Saint Stephanie and The Stones

A song about a lady who is obsessed with the Rolling Stones and wanting to live her life through this fantasy, but is losing touch with the rest of the world and whilst the music helps, it also hinders in other ways.  It is an unusual lesson to get from a song, but it is one of the best songs on the album with a great college rock sound and it reminds me a bit of the Connells ‘’74 – ’75’ with its whimsical progression and that slight sad tone to the music and words.

The second half of this album starts with a hybrid track, one that mixes their 60’s and college rock sound to create ‘Zero Confidence Level’.  With this song, it is a steady song that is not doing anything wrong, but it is not generating any great interest either.  It is not bad, but it is sort of passing me by each time it is on.

A gentle number about a lover who is no longer there and their pictures haunting the person like avenging demons in the night, all played out on acoustic guitar, bass and brushed drums.  It is a beautiful number, showing a side of the band that works incredibly well.

08 – Sweetest Thing
I love this song, it has something about it that reminds me of another North-East of England band called the Redeemers who also had that retro sound to some of their music.  It is a classic love/alternative rock/pop song which has its heavy sections and sounds fantastic.  It is a tune in a half on this record, doing exactly what it says on the tin and sounding sugary sweet.

It feels strange to hear an album get heavier as it goes along, but that is what is happening on this album so far.  ‘Hurry Up, Girl’ finds the band singing about wanting to be at a show and the lover is taking her time (cannot say him or her here, the title does have the word girl in it) and they are missing the band and it symbolises a failing relationship.  It is a bouncy song, one that is full of energy and spirit that is refreshing for the soul.

A song about how modern stars act and how their lifestyles are just a gateway to an eventual messing ending, which is sort of the same as it ever was for all stars if you come to think about it.  It is a rock ‘n’ roll number which a heartfelt message and more gentle rock from the band.

With a shot in the arm for one last time, ‘Fremont Street Blues’ hits the ground running as the band aim to end this album with one final rock anthem.  It starts off quietly, but soon the drums kick in and they start to rock a lot faster as the song progresses. I like this song, it is hard stop smiling as it just does exactly what was needed.  It adds fun to the proceedings and ends this album with a bang!

It might seem like I am being disrespectful by saying the band is basic or old fashion, but this is not meant to be a negative thing about the band or this album.  What I like about ‘Saint Stephanie and The Stones’ is what might make it a bit centre of field for some people, I love the fact it is an honest, it is an alternative college rock era record which would have been perfect for an early 90’s music revival fan.  It does not need fancy layering, hip producers and day-glo artwork, it is does what it says on the tin and it completes that task very well.  I would also like to point out that it does not feel like it is dated or old, it just has that retro feel that you can get from bands who love the 70’s and 80’s.  Any issues?  To be honest, no as it is (without being disrespectful) a very simple, basic album that has a great sound.  You could never accuse them of going all Napalm Death on the world, but that is a great thing as it means they are forging their own path in this life.  To give you a refence point of what I am trying to get at, I will paraphrase the wrestler Lance Storm. When he was wrestling in WCW, ECW and WWE, he was not in the main event, but he would be involved in some legendary feuds and moments.  He was once asked if he was happy with this and he said he was, as he knew there was wrestlers that can still have a great career in the mid-card and can make great matches.  The same thing will happen with bands, you need the solid, dependable bands who release good quality album and this is one of those records.  Not everything needs to be going at a million miles an hour, sometimes you want whimsical reflection and this album provides the soundtrack for that experience.

7 out of ten – This is good and worth checking out

You can purchase Saint Stephanie and the Stones from the Braddock Station Garrison Bandcamp page here.

You can visit the Braddock Station Garrison website here.

You can stream Saint Stephanie and the Stones on Spotify here.

You can stream Saint Stephaine and the Stones on Deezer here.

You can stream Saint Stephaine and the Stones on Tidal here.

Unhinged from the brain of Eddie Carter at 13:36