The Pop Group - Honeymoon On Mars 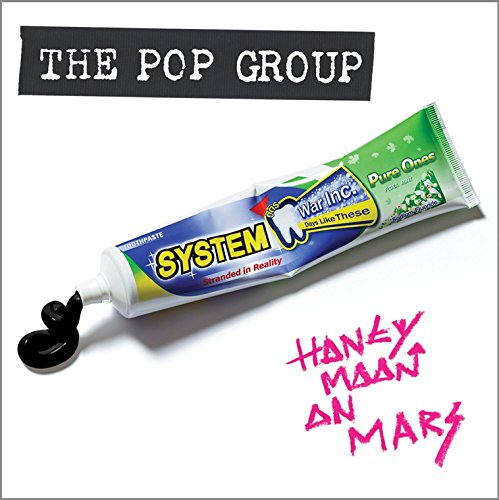 I made myself a promise that this album was going to be reviewed a hell of a lot closer to the release date than the last time I reviewed The Pop Group.  Their last album 'Citizen Zombie' (my review linked here) was released in February 2015 and I did not review it until the October time.  This time around, I am reviewing this album within the first week of the album hitting the shops and I am also hoping to get to see them when they commence their upcoming UK tour.  'Citizen Zombie' is an album which I have returned to a few times and it still gives an uncompromising view on the world and it is such a strange record.  It is also one that improves with each listen and I love their attention to detail on this record.  This album in a very short time scale by The Pop Group than the gap between 'Citizen Zombie' and 'For How Much Longer Do We Tolerate Mass Murder?' and I can only put that down to a fire being lit upon the release of their last record; however, now it is time to find out how the album has turned out.

Starting the album off with a low pulsing piece, sharp guitars and vocals which sound as if they are shouting into the wind and wanting people to think for themselves.  It is a sparse and brutal number that uses the spaces to maximum effect.  It has beautiful synths, heavy bass which is punctured by the guitar and vocals are delivered with power and humility are required.  It is an interesting opening, both volatile and calm in equal measure and it picks up the interest that was started when I first heard them.

‘City of Eyes’ follows on with a look at how everyone is being watched all of the time, it is slightly surreal and loud in comparison to ‘Instant Halo’ and it fills all the void when was used as a weapon on that song as well.  It does not bother with anything too fancy or OTT, in a given sense and degree of OTT – it is the Pop Group we are talking about here – as they lay down a barbed wired curse on the listener and it focuses your mind on how strange the world actually is these days.

A darker tone is taken on this song, a heavy dub influence is the centre piece of this number and it is back to the spacious, almost fluid section of the band.  It is a sinister number that never really lets you get too comfortable and that is the best thing about the number.  You are not meant to relax to this song, it is confrontational in nature.  I like that this song is challenging and not easy on the ears, the day that this sort of music is put on to be background music will be a messed-up day indeed.  PS – It is one of the best songs on the album, fantastic number.

With harsh percussion, female backing vocals and more beautiful bass, ‘War Inc.’ is another song that is trying to make sense of the world as it is, which is not a place that it should be.  It is a strong and harsh number, once more you are challenged from the outset and it is very edgy and has a little bit of an industrial sheen to sections of the song.  Just when you think you have the song figures out, it is just hits you again with those messages and you are once again trying to get your foothold as they continue with the punishment.

With just vocals to beginning the song, this song soon opens up to a glorious Post-Rock number.  It is a strange number, another one which is not too easy to understand at first and it takes a while for you to get it.  However, it is one that keeps on revealing itself over repeated listens, slowly hinting at more and increasing in worth with each repeat.  It is my favourite of the album, it is just an enigma which I am still trying to figure out and one day I hopefully will see the whole picture as it is a luscious piece of art.

One of the bleaker moments of the album, ‘Little Town’ is not easy on the ears by the standards of this album; it is one of the heavier numbers as well, with the bass working overtime and reaching lower that it has before.  Again, it is not trying to be comforting, it is trying to be confrontational and shine a light on the more fucked up sections of the populace.

Noise, noise, synth, noise, dub bass and more noise – ‘Days Like These’ follows that dark path that has been the outlet for this album.  It is a horror fest in a song, talking about the 13th hour and that hope could be a power; it sounds as if hope has been lost and all is not well.  This song is one I am still dealing with; I have not quite settled upon it and I am perfectly fine with that as it is one I keep returning to over the last few days.  It is not designed to be easily accessible and it is trying something different.  At the moment, it is a good song with prospects of being one of the most memorable of the album once the dust has settled.

The sound that comes from the speakers with ‘Zipperface’ is some of the best from the album, it is also quite possibly the most accessible of the album upon the first listen as it is a little bit crazy.  It has a lot of energy and the lyrical content is intriguing as well – who IS Jimmy the Squealer?  But it is not a song that will be loved by all, but I quite like it for being a little bit easier on the soul (at least on the surface, again, we are talking about the Pop Group).

The penultimate song starts with an alarm and dives into an avant-garde pop noise that does not rest or stay still, you are moving along with this noise that sounds like a chemical haze and it is only every now and then that you make can see the song focusing on one point.  It is a chameleon song, always shifting and changing with as much bright and brash noise as it can cope with.

‘Burn Your Flag’ sounds as if the music is skipping for the first few moments, then the cry of bullshit is shouted and the vile is unleashed one more time onto your poor and broken soul.  It keeps up that relentless attack that started on ‘Instant Halo’ and has never ceased throughout this album.  It is back to the sparse sound in places, then it fills with noise and the quieter moments return; but the vocals are spitting venom and fire till the last note and it does not relax at all, this seems to be a great way to end this confrontational album.

What a beautifully strange, complex, dark and fascinating album we have here...... It is a wonderful example of Post-Rock and a critique of modern society that is damning in its scorn and condemnation of how we are currently living.  It is one that will find its target audience lapping up every strange note, explosive vocals and deep bass, further exploring the theme of blind obedience that is so prevalent in their eyes.  There is no crumb of comfort and safety is an illusion, all qualities I want from this band.  Is it as good as their back catalogue?  Well, how do you compare one piece of art to another, as this group for me are artists that use music to form their pictures of the world.  I would argue that it is, but it is always a few months after the first listen that anything by The Pop Group makes any real sense.  If Trump has not blown up the planet by then, it could be amongst their best work.

You can purchase Honeymoon On Mars on Amazon here.

You can stream Honeymoon On Mars on Spotify here.

You can stream Honeymoon On Mars on Deezer here.

You can stream Honeymoon On Mars on Tidal here.

Unhinged from the brain of Eddie Carter at 19:13