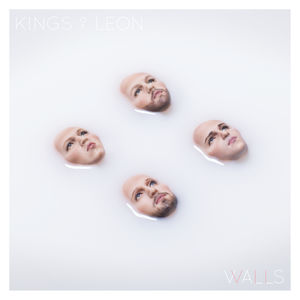 The band, lead singer Caleb Followill, his brothers Nathan (drums) and Jared (guitar), and cousin Matthew Followill (bass) have a very recognisable sound. It's the soaring yet slurred vocal style, the repetition of phrase, and jangly guitar over a rock beat that could be a difficult combination, but somehow works. And it's this combination, commitment to each other, and work ethic that's continued to work for them the world over for 16 years. Walls is their 7th Album.

Kings of Leon conjure up vivid mixed memories for me. 10 years ago, in the space of a year I had experienced several stressful life events, which resulted in intense exhaustion and depression.

A new work mate kindly gave me lifts, and took me around to see the area in her car. She often had Kings of Leon playing.

I enjoyed the music and her company, and appreciated her kindness. So, when I listen to Walls I'm in an ambivalent frame of mind. But that's what music is, it's powerfully emotive.

Fast forward to October 2016 when Walls was released, and I honestly couldn't tell the difference when the first track 'Waste a moment' started. It’s pretty much exactly as the title suggests, and sounds the same as their work did back in 2008.

The second track 'Reverend' was a different beast, slower and slightly more reflective. Now and again you can hear a truly beautiful voice come through, a substantial skill.

I'm ashamed to say I then got a little bored and absent minded through the next few tracks until one caught my attention 'Conversation Piece.'

'Muchacho' is a nice change of pace and so is their title track Walls. Walls and Conversation piece shows what this band is capable of should they veer away from their respective style. And I'm interested in how they develop.  Good stuff.

I'd definitely have these guys on my car iPod, and they sound like they have an infectious energy, relentlessly pummelling their music out, so perhaps they would be worth a watch live. They are one of the world's biggest rock bands after all.

7 out of 10 – This is good and worth checking out
Favourite Track: 'Conversation Piece.'

You can purchase WALLS here on Amazon.

You can visit the Kings of Leon website here.

You can visit the Kings of Leon Facebook here.

You can stream WALLS on Spotify here.

You can stream WALLS on Deezer here.

You can stream WALLS on Tidal here.
Unhinged from the brain of Unknown at 22:22