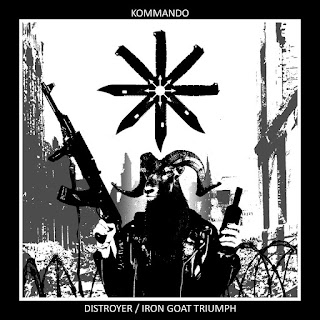 Well, this is a fucking laugh and no mistake! Straight outta Germany, Kommando formed in 2015 and have (in their own words) been on a mission to bring the violence back to modern metal! Blending the styles of Black Metal and D-Beat into one hateful ball of fury, their mission has certainly got underway in spectacular form.

Opening up with what is also the name the band have given to their music - Machinegvn Pvnk - one could be forgiven for thinking they've been transported back to the early 80's and the birth of D-Beat. This is proper punk, none of that day-glo Blink 182 bollocks where the signer is a whiney cunt singing about dick jokes and a woman he fancies. This song will never end up on the soundtrack to a gross-out teen comedy. No. This is the sound of a circle-pit in a club going hell for leather whilst mohawks, hairys and a multitude of studded leather jackets all participating in the mayhem. This is what it is all about. FUCK YEAH!!!

Vntitled is up next (the band tend to replace the 'u' in words with a 'v') and you can hear the Black Metal influence in the speed of the guitar riff and the fact it sounds more like a wall of noise. This isn't the Black Metal variant which is raw but still has enough bells and whistles to elevate it above the bat-cave, this is as raw as the elk that was taken down by a very hungry orc. Very reminiscent of Celtic Frost in places too. Vocals keep the song firmly anchored in the D-Beat corner but the music is utter hatred on a stick. I like it.

IndoctiNation smashes in and fucks the place up good and proper. Towards the end of this song, it switches between mid-paced and fast which makes for a nice contrast. A call to arms, imploring the listener to crush, kill, burn, destroy. Sounds like a small minority of England fans at the Euros...

Old And In The Way - Rolling intro which brings to mind the Black Metal influences again, it then switches seamlessly into and masterpiece of D-Beat brutality. Fuck me, this is a great song. What gets me is how it veers between the Black Metal and the D-Beat without sounding forced, it all sounds natural. Vocals are savage as fuck and the music compliments them perfectly. The music to go headhunting...

Crvsh Them To Death is next and ups the punk ante! This is another great one - starting off with punk rhythms before alternating into the kind of wall of death guitar riffs Black Metal that makes the whole thing sound like a bar brawl between Discharge and Darkthrone. I know that it's a cliche to use a comparison along those lines but it honestly sounds like that! Another great one! We've got a killer album here...

Iron Goat Triumph - The best minute and a half with your clothes on. A relentless slice of punk which sounds like a war. On this one, it's hard to tell where the D-Beat starts and the Black Metal ends. It's the perfect distillation, if you will. The whole thing is an angry ball of hate and it's being kicked through your front windows...*headbanging*

Bitching Hour - Sounds like my ex. Seriously, this song carries on a similar format to the previous one, albeit with more punk and thrash influences. In a way, it reminds me of a heavier Nuclear Assault.

Kommandojugend - Now this one is pure Black Metal. This isn't your Cradle Of Filth Black Metal though, this is way more murderous. This is the harsh side of Black Metal where everything sounds like a nightmare. The backing vocals which sound like people getting stabbed only add to the ambience. I wish I'd spent more time seeking stuff like this out instead of buying those silly S*ul*ly records! Seriously...

Alle Gegen Alle - This is more punky, sounding a little bit like Ryker's, a hardcore band who were also from Germany. They were heavy as fuck too but seemed more influenced by Oi! as well as Groove Metal. It's a nice way to bring the album to a close, a bit of aggro and bouncing off the walls.

That was fucking awesome, to be frank. Everything was perfect and not a fault wrong with it. No more can I say other than here is hoping that Kommando continue to release quality music and play the UK soon (Newcastle Upon Tyne especially). Well done lads. And how fucking awesome is that album artwork???

Top Track: Old And In The Way.

Right, I cannot find anything on Spotify, iTunes or Amazon for this remarkable band but they do have a website and a Facebook Page for you to have a look at.

Unhinged from the brain of Unknown at 22:20