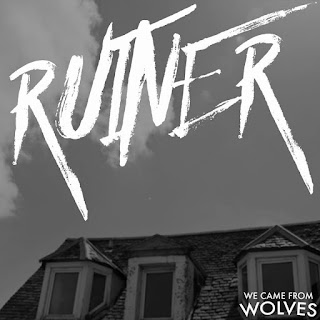 Welcome to the review of the third single to be released from Perth based award winning, alternative rock act We Came From Wolves (aka wecamefromwolves - apart from on here, I have seen the name show in both ways).  Since I last reviewed them with their second single "Where's Your Love Go" (review linked here) and "wecamefromwolves" (album review linked here) they have won the Best Alternative/Rock act in the Scottish Alternative Music awards, done a UK wide tour, they are about to do a tour of the Highlands of Scotland and have a BBC Live session coming out as well.

Back when I first reviewed the album, this is what I had to say - The penultimate track to the album is "Ruiner" and no, it is not a cover of the Nine Inch Nails song.  You get a sense that the lead singer is not very lucky in love (sometimes his own fault, sometimes others) throughout this album, poor mite; it is another song about a relationship gone sour and the singer admitting he is a bit of a selfish man, and this song deals with the guilt that arises from that lifestyle.  Musically it is as good as anything on the album, lyrically it sounds like someone is trying to exorcise old ghosts and wants to move on to new pastures.


Having listened to the song again, I stand by what I said before.  It is a great song that warrants being released as a single and Kyle Burgess from the band wrote in the press release it is based on a dark period of his 20's and that it is also a tale of evolution of the person as well.  It is a song that works outside of the album as well, with a hint of angular art-rock to the song and a great set of harmonies.  The video for the track is below and it will be released on 18th March 2016; but get the album as well, it is a cracker!

4 out of five - This is really good, well worth checking out

Top track - saying as it is a one track single, Ruiner


You can stream Ruiner from the wecamefromwolves Soundcloud page here, where you can also stream their album as well.

You can stream Ruiner from the album wecamefromwolves on Spotify here

You can stream Ruiner from the album wecamefromwolves on Deezer here

You can stream Ruiner from the album wecamefromwolves on Spotify here

Unhinged from the brain of Eddie Carter at 14:16