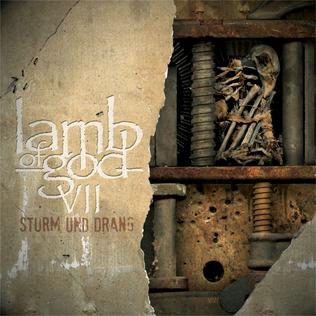 Lamb Of God have released their first album since the incarceration and eventual acquittal of lead singer Randy Blythe who was accused of killing a stage-diving fan at a gig in Prague, while the band were touring their then-new album, Resolution. A lot of the experiences he went through at that time were put into the formulation of this album, although he denies it's an atypical "prison" album. In fact, the album title of "Sturm Und Drang" roughly translates from German to "Storm And Stress". A very apt title for a calamitous time,

Formed in Richmond, Virginia in 1994 (albeit as Burn The Priest - the name switch came about from too many line-up changes and to avoid being confused for a Satanic Metal Band. They soon built up a following thanks to their thrash-infused groove metal which showed there was life after Pantera after all (Damageplan doesn't count - and, I hate to say this as I'm a fan of both Abbott brothers, but Damageplan was a bit crap, really. Hellyeah are even worse but I digress). Their fourth album - Ashes Of The Wake - has already been blogged - right here, as it happens - where it didn't get a very good score. Not having heard it, I can't comment but I can heartily recommend both Resolution and Sacrament. Anyhow, let's get on with listening to this one...

1) Still Echoes - Aww yeah, ya fuckin' dancer! Some great guitar work aside thundering grooves and rhythms gets the album underway. Things break down (in a good way) before resuming business as usual towards the end. A swagger behind this song, fucking awesome!

2) Erase This - Fuck yeah!!! Thrashy opening before turning into the kind of rhythm that gets heads banging and pits started. You can tell the intent is there, the band having been freed from the stress of the last few years and are coming back with a point to prove. And what better way than by writing and playing some awesome groove metal. Great solo in the middle too.

3) 512 - Melodic guitar slightly behind a swaggering rhythm. Taking the pace down a couple of notches in favour of atmosphere and variety, this is crunchy and solid. More great solos and Randy vents his lungs out. Deffo an album highlight.

4) Embers - Weird intro which has octaves playing over muffled drums. Things then kick in and we've got another savage attack. A rumbling rhythm as the verse before soaring chorus. This is another great song. Again, some excellent guitar work and solos. Funny how they're starting to make a comeback after largely being ignored for much of the 00's. I guess that's what happens when you get nu-metal turkeys who can only do one-finger-one-string riffing. Things get more melodic and soft towards the end before fading out on bass and drums. Contains clean vocals from Chino "Deftones" Moreno.

5) Footprints - More beef than a cow factory, we've got some more supreme groove on the way. This song isn't as good as what's came before it but we have been spoilt so far. Don't get me wrong, it's a good song but we've had some mighty fuckers before this one. Still, it does the job and will no doubt get a few people down the front at the live show moving.

6) Overlord - clean opening and melodic singing, are we in power ballad territory? It certainly has those attributes but it doesn't have nearly as much saccharine as those things. The song also seems tinged by bitterness and regret, which is no surprise. And - holy hell, we've gone straight into windmill headbanging territory! This goes on for a bit while a tsunami of anger and venom spills out before calming down and getting back on track for a slow, respectful finish.

7) Anthropoid - Quite a good song, all slamming rhythms and whirlwind guitars. An anthem of sorts. It's not too bad but we've already heard much better on this album already.

8) Engage The Fear Machine - well, this plays like an army marching over the horizon and fucking shit up. Declaring the world is coming to an end is quite prophetic, seeing as how things are getting tense over Syria. One thing I've learnt whilst listening to this album is why Chris Adler (drummer) was chosen to join Megadeth, the guy is an absolute beast of a drummer! Here is hoping he gets the chance to play some decent tunes as the last few Megadeth albums have been very poor (Last decent one was probably United Abominations - Endgame had some decent riffs but it didn't put them to good use). Anyhow, this song rules!

9) Delusion Pandemic - this also kicks ass, Thrashing intro, groove interlude before going into a lurching verse, then the groove picks up again. Melodic mid-section which works really well. The song itself seems to be an attack against those types of people who feel the world owes them something - confirmed by a spoken-word rant towards the end. Still, another great song, that's quite a few of them now.

10) Torches - we're onto the last song now and we've got one of those atmospheric intros with the spoken word. Kind of plods along until things pick up in the middle with what sounds like a build-up into the type of thing to start off a circle pit, which comes in but later than anticipated, and even then it's only for the length of the solo. We're soon treated to some fading in-out vocals with an ethereal effect before we go heavy again. Gentle closing music. Like a lingering thought,,,

Well, that kicked ass! Just goes to show that, when done properly, groove metal can be a lot more than macho posing and threats while the music is an incoherent mess trying to reflect the "toughness" of whatever the vocalist is passing for lyrics. Whilst this album doesn't quite elevate itself to God-like proportions, it certainly kills 48 minutes. If you're the type of person who likes groove metal then this album will be like the nectar of the Gods to you. It's not going to appeal to everyone, but I reckon there may be a few surprises in there...

8 - Oh, now you have my attention. And maybe even my money, time and heart.

This album is available on iTunes.


Unhinged from the brain of Unknown at 22:57