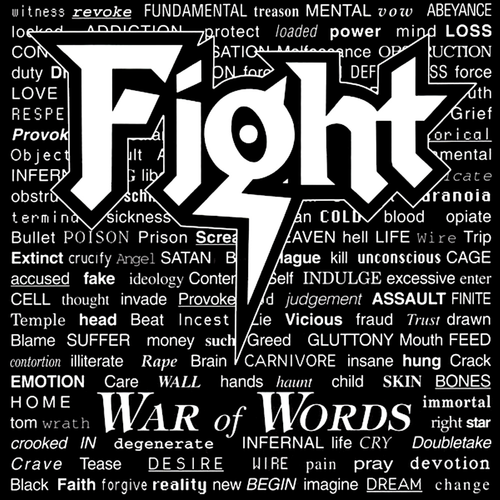 Doing those Killers blogs got me thinking about Fight, another band who were briefly in the spotlight of the 90's metal scene thanks to their singer, Rob Halford. A man who, as we all know, was the voice of those Metal Gods known as Judas Priest. But after his tenure in that band came to an end, Halford put together what wikipedia has termed a "street metal" band - which was actually very good. He'd left Judas Priest about a year before this album came out in a midst of animosity. Burn out over the trial (Priest had been taken to court accused of putting subliminal messages into songs which inspired the listener to kill themselves)? Possibly. There were a few stories as to why there was a split, but that's not why we're here.

The thing that first grabbed my attention were the publicity shots of the band - it seemed like Rob was not only going for a musical reinvention but a fashion one too, what with the cut-off jeans, sleeveless shirt and boots. Quite a change from the leather get-up he wore in Priest. His bandmates seemed to have a preoccupation with Charles Manson longsleeves but I think every kid did at one point. Fuck knows why. I've got mine coming in the post...

The album itself is quite curious - it desperately tries to be as up to date and as relevant as the sounds of the time but can't quite get there, instead going back to the old-school origins of certain members. Which means that you have an album of old-school metal intersped with bits of thrash, groove and a dash of grunge at certain points. It's not as bad as it sounds. Lyrically, a lot of it appears to be about modern social ills, which isn't a surprise (see above). What I will say is that a lot of the songs follow the "song title as the chorus" pattern which does get very repetitive after a while. I'll try and give as much input about each track as possible. I'm reviewing the '2007 remixed and remastered version', just so you know. It's a far better quality than the original.

Into The Pit - The album opener and a sign of intent. Halford's vocals soaring over the type of guitar riff that Lamb Of God would enjoy. It's a good opener and also works as an introduction to the other members. Drummer is Scott Travis who was also in JP, guitarists are Brian Tilse and Russ Parrish (Also in that really, really shit band Steel Panther) and bassist is someone called Jay Jay.

Nailed To The Gun - A fucking ripper (no pun intended) of a track! Trying to be a heavy, vicious beast, it gets there - although I do find that Halford's lyrics are perhaps a bit odd for this type of song. They seem very polite, almost like Stephen Fry writing for Pantera. The solo in the middle is great though and the gang back-ups on the chorus certainly sound awesome! Deffo a furious headbanger of a song and one I like to play at the gym when I'm working on the punchbag.

Life In Black - A slow song. Sounds like Alice In Chains before the skag took ahold. Except Rob doesn't sing in that typical 'grunge' voice which replaces all vowels with the letter 'A'. Not too bad, I guess.

We interrupt this Spotify ad-break to bring you a selection 90's rock/metal fashions in one photo: plaid shirt with cut-off sleeves, backwards baseball cap, bandana and tattoos with a distinct 'prison' look about them: Fuck yeah! (And that's the last time I do that bit)

Immortal Sin - Even more of a grunge influence on this one. Could maybe be a Soundgarden b-side. Shite lyrics with references to a "buried flame". The fuck??? Despite that, this is a very good song. Nice and slow with a crunchy verse riff.

War Of Words - The title track and a bit of a fist-puncher. Rob is back to soaring vocals as on the last few songs, he seemed quite content to stick to a mid-range vocal. Stomps along before fist-punching chorus. Mid section sees them trying to get heavier but it doesn't quite work.

Laid To Rest - Starts off mysteriously with a clean guitar passage before a chugging riff comes in. It seems very arabic but without too much cheese. I think we're on the bus to 'Grungetown' again. Mind, at least it's the good side of grunge. The sound that was closer to metal - in an audio sense, of course. This is another good song. I'll be honest, we've probably not got a gamechanger here and although it's well done, there were better albums at the time.

For All Eternity - Another slow song, this reminds me of Judas Priest during their more 'ballad' moments. Nothing to see here, although the vocals are among Rob's best...

Little Crazy - Opening with a slide guitar and the kind of riff that brings to mind 'Space Lord' by Monster Magnet (That song wouldn't come out until much later). It's quite original in the context of this album, really. Very good.

Contortion - Clean into becomes stomper. Another headbanging monster of a song. Very reminiscent of Alice In Chains. Methinks that quite a few hours were spent with both 'Facelift' and 'Dirt' during the creation of this album. The alternate vocals on this song by one of the band members (Wiki gives no clues) don't sound too confident but they still manage to add to the song.

Kill It - I really want to like this song as it has a killer opening riff which also features in the chorus but it's not landing. It's good but we've has better songs so far.

Vicious - Certainly lives up to it's name. Heavy riffs and some shouty vocals, it's the sound of a man ready to kill! This should have been at the front of the album, ready for action.

Reality (A New Beginning) - The final song on the album and is like a faster "Laid To Rest". Vocal effects and some nice, tight guitar work. Quite a good song. In fact, it's a really good song.

So, like I said, a most curious album. It's both the best and the worst of both old and new school metal. Sometimes all in the same song. Unlike Killers, however, it's the sound of a group putting their own twist and ideas into (then) modern music as opposed to copying it note for note. Problem is though there is a bit too much filler on this album and it's got too many slow songs. A few more faster and possibly a more varied approach to song structure and writing would have helped as well. Still, as far as curios go, you cannot go wrong. Fight would go on to make another album and from what I've heard so far, it's even heavier than this. I might let you know if I can be arsed.

Top Track: Nailed To The Gun.


Unhinged from the brain of Unknown at 01:06