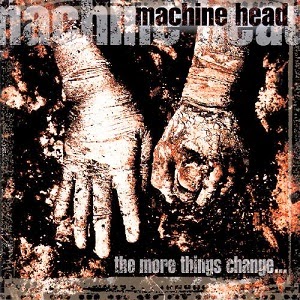 This is Machine Head's second album and IMO, is a bit overlooked. No-one seems to mention this album as often as the others. "Burn My Eyes" is hailed as an awesome debut, and you'd be right. "The Burning Red" and "Supercharger" are generally looked on as nu-metal cash-ins (A bit unfair in the case of TBR - although Robb Flynn wearing a TRACKSUIT and having liberty spikes in the video to 'From This Day' didn't help...) and the other albums afterwards - "Through The Ashes Of Empires", "The Blackening", "Unto The Locust" and the new one, "Bloodstone & Diamonds", are generally regarded as a renaissance for the band, a wiping clean of the slate where they finally got their shit together, grew up and began crafiting songs which were monsterously heavy yet retained an excellent level of musicianship with well thought out and crafted songs. I reckon this album was the genesis of that sound and had they not got distracted by nu-metal, they would probably have made more of the same after this one.

This was the first album to feature former Sacred Reich drummer Dave McClain who took over from Chris Kontos (He ended up joining a band called Konkhra but the album he played on wasn't very good. Shame, as he's an excellent drummer). This was also the last album to feature guitarist Logan Mader who left/got kicked out and ended up joining Soulfly for about five minutes. I met Mr Mader once and he was an interesting character. Anyways, onto the music.

As mentioned before, this album marks a slight change in sound for the band. It's still a comination of thrash metal and groove-metal but if "Burn My Eyes" is a boxer who, at the start of the round, springs out of his corner and starts wailing on you straight away, "The More Things Change" is the boxer who ducks, bobs and jabs whilst waiting for an opening before landing the killer blow. Think of Rocky III and the final match where Rocky tires Clubber out before beating him. Kinda like that I guess.

Ten Ton Hammer - A fucking CRUSHING opener! When I first heard this, my heart sank as it seemed there was a trace of nu-metal creeping in with the one-finger-one-string riff that is the main part of the song. Mind, this was the mid-90's and that style was becoming popular even though that type of riff is older than Noah. The structure is thus - the verses are harmonics and the choruses are crushing riffs. The bridge is a ferocious ball of fury which helps the song nicely.

Take My Scars - The closest thing this album has to a potential hit single. Plenty swagger and balls, it gets a great pit going! The closest we get to the groove of the first album but with better dynamics and presentation.

Struck A Nerve - Very hardcore influenced. Almost Discharge-esque in a way (The digipack version of this album had them cover that very band's song 'The Possibility Of Lifes Destruction'). It motors on before a well measured breakdown into a mosh-part type riff. It's the kind of riff that is reminiscent of "Blind" by KoRn or even "Scapegoat" by Fear Factory. Great song. We're onto a winner here.

Down To None - Clean opening which turns heavy very quickly. The song itself switches between slow and mid-paced at the drop of a hat. It's done flawlessly too which would suggest a lot of practice went into it. Towards the end, things get very intense. The speed picks up and the song closes in a bundle of fury.

The Frontlines - Apparently, written whilst on the "Burn My Eyes" tour so it would have given a clue as to the direction the band were taking. Another song with shifting dynamics and tempos. As before, it's handled very well. Seems to be quite a frantic atmosphere behind this song. Robb Flynn's vocals are absolutely spot on here, and the rest of the album, come to think of it. It's also worth mentioning that the production on this album is spot-on too. Ending in a flurry of harmonics.

We interrupt this spotify ad-break to bring you an awesome Kerrang! cover featuring Robb Flynn: 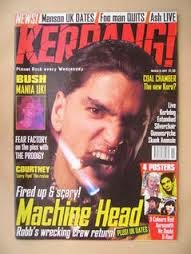 Spine - The kind of bass intro which rattles the fillings in your teeth before moving onto a slamtastic riff! One of those songs with not much happening in verses save for some guitar noise and drum patterns, but the choruses are moshtastic! Slow burner of an outro though. Quite effective.

"Bay Of Pigs" - Anti-police song which flies by at a hardcore pace with breakdowns in the chorus. It's fast, it's heavy and extremely pissed off at police who reckon they're a law unto themselves. Quite apt that it should still stand up today. given all the shit going down in St Louis right now...

Violate - Quite a harrowing song, really. Sung from the POV of a sexual abuse victim, it reveals a level of pain, anguish and fury that only someone in that situation would know. Very slow and brooding. Choruses are blazing fury. Speeds up towards the end.

Blistering - What sounds like a dentist drill soon changes to a creschendo of guitar noises before descending into heavy riff territory. A nice, headbanging riff. Plenty groove and swagger in the choruses.

Blood Of The Zodiac - A fine album closer. Weird guitar intro which then leads into a song which is a nice slow pace. Almost waltz-like, in a way. Not that I'd suggest waltzing to this lol. Quite an atmospheric song.

So, there you go. After this, they would go on to do "The Burning Red" which isn't as nu-metal as people make out, although it has smidgen of influence - a bit like "Roots". This album, however is excellent. For years, my favourite Machine Head album was "Burn My Eyes" due to the fact it tore your fucking head off. To me, it was the absolute crystalisation and perfection of groove metal. But...now I'm not so sure. I think it may be this album due to the fact that as mentioned, the band still retain their killer blows and grooves, but are building up to them instead of going flat out. I guess both albums are better than each other for different reasons. The only downside to this album is...the song "My Misery" (From the soundtrack to a movie called "Demon Knight: Tales From The Crypt) is a bonus track on the digipack instead of being a part of the album proper, but if that's the only thing I can bitch about, then we're all good. This album IMO is pretty much perfect.

Yup, it's on iTunes.


(I used to dress like Robb Flynn in this video...)
Unhinged from the brain of Unknown at 01:37