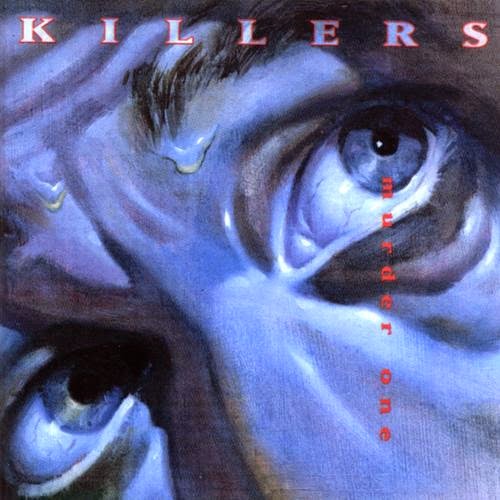 Much has been said about former Iron Maiden vocalist Paul Di'Anno. and not all of it has been kind. Mind, if his autobiography "The Beast" is anything to go by, then it's not much of a surprise. Tales of drink abuse, drug abuse, spouse abuse, band member abuse, innocent bystander abuse and pretty much a fuck-ton of other things ending in "abuse" are in abundance. After the book was published, stories of "dole abuse" and a stay in one of Her Majesties Hotels followed. It seems that since leaving/being kicked out of Maiden, Paul hasn't really fulfilled whatever potential he showed on those early records. Make no mistake, "Iron Maiden" and "Killers" (the album) are fucking blinding. Truth is, Maiden were going in a direction he'd not have been able to follow. The style on the first two records was that of blinding 70's-style rock with a dash of punk thrown in. No way in Hell would he have been able to sing on the new stuff. This seems to have developed a chip on his shoulder the size of a gorilla as there have been a few solo albums where there are more Maiden songs from his time in the band than original material. This is another bone of contention - if he sold his royalties to the Iron Maiden songs he'd written and performed on, why bother going back to them at every opportunity? I guess it must be a way of keeping people interested and also a way to get any 'performance fees' but the money from that cannot amount to much, surely? Even his autobiography is called "The Beast" so it's giving the impression that it's cashing in on the Maiden connections but using an album he never played on. And the name of this band is pretty self-explanatory. Of course, it could all be a coincidence. Oh, and he's banned from America due to some shit he got up to. Possibly beating a woman up, I can't remember.

Killers (Not to be confused with The Killers) were formed in 1990 and rumour has it, the band were signed after a record label showcase where they allegedly played Iron Maiden songs! Whatever works, I suppose. Anyhow, I've jabbered on about shit for too long, let's listen to some music. Btw, info on this album is scarce due to wiki not having an updated page so please bear with me...

Impaler - Opens with a womans scream and a thundering tom-tom attack before launching into...the kind of thing that Judas Priest would have considered a b-side. My guess is that one ear had been on 'Painkiller' as that album made Priest a credible force again, therefore they were trying to capture some of that magic here. It nearly works. Paul's voice is in fine form, all soaring vocals and the musicianship is tight. A fast, heavy song as well, only problem is it sounds a bit too close to Judas Priest. Especially as it also appears to be about some kind of being with either messianic or murderous properties - or both, something Priest liked to write about. Mind, at least they never tried to rip off anything from "Turbo"...

The Beast Arises - That's what she said! Seriously, this is one of those songs that has "stadium anthem" in mind, the audience all headbanging or fistbanging in unison. Sounds like typical fare for that sort of thing. Not bad, not great.

Children Of The Revolution - A cover of the T Rex classic (And song which nearly got them into trouble as some twat thought it had Communist leanings...) and...it's pretty fucking good! More 'metal' than the original with some great guitar solos.

S&M - "You've reached New York's most dominant mistresses and their slaves". Sure we have, love. Mind, I have to admit - this is a fucking brilliant song. Some fantastic guitarwork, especially for the chorus and the vocals are great too. Just goes to show if he'd kept his focus and not let the drink and drugs get in the way, and had he found a decent band from the off, Di'Anno might have managed to carve a niche somewhere instead of becoming the Paul Gascoigne of metal. Shame, really.

Takin' No Prisoners - Back to some stadium fare. Clean guitar verses that lead into pre-chorus and chorus of electric heaviness with vocals that are trying their best to get some kind of anthem going, it doesn't quite hit the mark. But it gives it a go. It brings it home that in a sense, this is a most unusual album - it's roots are very clearly in 80's stadium metal given the members involved in this project yet it came out in 1992, a year in which rock/metal was pretty much changed by the grunge/alternative explosion. Also, it was a time when groove-metal (sort of an infusion of thrash and mid-tempo rhythms) was catching on so this type of traditional metal - for want of a better way of putting it - was unusual at this time.

Marshall Lokjaw - Another Judas Priest b-side, In fact, this song reminds me of "Freewheel Burning" and "Exciter". Now while there is nothing wrong with a bit of Priest worship, it does seem a shame and a waste of potential. Don't get me wrong, it's a canny song but it sounds like someone else.

Protector - Nah, not keen on this one. Some guitar riffs that sound quite like Maiden but overall it's not that good a song. Next...

Dream Keeper - This is a bit better. Moving into power ballad territory, we get to wave our lighters in the air. Very haunting outro that shows it's 80's roots. Again, it's another example as to how with the right backing, Di'Anno could've had a great career instead being known for the misdemeanours...

Awakening - A stomper of sorts, it's ok...but I've heard better. Not really much to type about other than it's played well and nothing to fault.

Remember Tomorrow - Another cover. This time an Iron Maiden cover - although to be fair, Di'Anno wrote this one and it's one of the corkers off the first album. Near-identical to the original, it benefits from having a better production job due to the then-modern equipment in the studio. It's good but as mentioned, is pretty much identical to the original.

So, there you go. I know I've missed out Battlezone, Di'Anno previous band before these but from what I've heard, I'm not missing much. This is a good album but the fact that a good portion of the material sounds like another band - not just Iron Maiden - let's it down slightly. The fact that the material in question is good manages to rescue a few points. The band would go on to do a second album - and boy, did things get messy for that one...

Yeah, it's on iTunes.


Unhinged from the brain of Unknown at 02:50