Godflesh - A World Lit Only By Fire 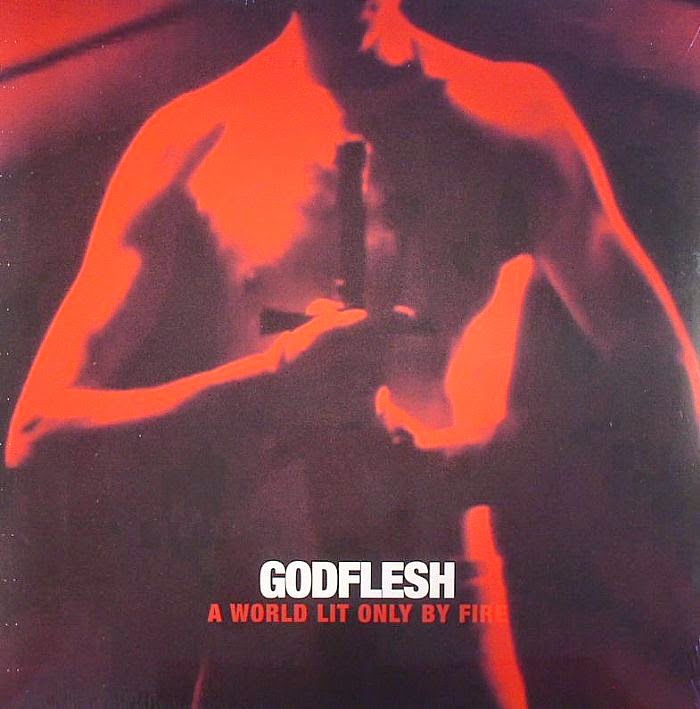 Godflesh are back with perhaps the best comeback since Lazarus. Never afraid to stretch themselves or push the boundaries, they return with a great album which although not as good as "Pure", is at least better than "Hymns".

One of my fave bands of all time, Godflesh came to the public consciousness with their debut EP, the self-titled 'Godflesh'. A polar opposite from Justin Broaderick's work in Napalm Death (He played on the first twelve songs on "Scum"), it was slow and brutal. Proof that heavy music doesn't have to be all fast. The mix was very lo-fi and it seemed like the bass (provided by G.C Green) was drowning out the drum machine rhythms and guitars - themselves more like discordant noise than anything resembling chords or riffs. Later releases would somewhat tinker with their sound and they would keep us entertained up until their eventual split in 2001. This was a particular downer because I, your humble narrator, was to see them supporting Fear Factory alongside Raging Speedhorn (who also dropped out) in Newcastle. In the end, Fear Factory (Who rate Godflesh as one of their biggest influences and even 'borrowed' a couple of things from them...) were supported by Janus Stark and fucking Sugarcoma, a band who are the prime example of overhype. When a shit Britney Spears cover gets a better reception than your own material, it's time to call it a day. Mind, Godflesh turned up for one song but it wasn't enough to rate their performance. Oh well. Anyhow, onto the music...


New Dark Ages - opening with feedback swells and a high-hat rhythm tap, it sounds like your atypical creepy opening before the guitars, bass and drums kick in. Discordant riffs are the order of the day. Justin's vocals barking out like a drill seargents orders, certainly creates an atmosphere or sorts. The first thing noticed is that it's quite a steady, reliable rhythm. Nice way to open the album.

Deadend - Taking a further step into Hell, this rumbles on at a slightly slower pace than the opener, nice riffs, sounds like Black Sabbath practising in a steel mill. Riffs more resembling riffs but one gets the impression the guitar is more like a torture device than a musical instrument for this song.

Shut Me Down - Punchy electronic opening makes way for a stomping industrial rhythm with an excellent riff over the top. It's by now worth noting that the guitar tunings appear to be lower than on previous records, by the sounds of things, the band are playing 8-string guitars as the tuning seems to be in the F# range (8-string guitars are tuned F#BEADGBe). I may be wrong but there is definately a lower tuning going on here. But it sounds fresh and exciting. Mind, Godflesh always were a band who utilised downtuning as a way to try and create something new instead of just for heaviness sake.

Life Giver Life Taker - Guitar intro is slightly phased before turning into a fast (?) song. And it's a reintroduction to one of the things Godflesh excelled at - clean vocals! Even though they're practically buried in the mix, you can tell they're clean. It's a technique that Fear Factory were accused of stealing from Godflesh but there is a slight difference imo. Fear Factory tried to sound melodic when doing clean vox, Godflesh to me sounded like a moan, which is what this song is doing, but in a good way.

Obeyed - Discordant after sounding like it was going to have structure. A glorious racket! A bit of structure inbetween verses and a refrain of crashing guitars that not only opens the song, but is repeated at various points throughout. It's stuff like this that reminds me why I got into this band in the first place. It was at a time where the only examples I'd heard of 'industrial' music sounded like bad techno.

Curse Us All threatens to just do that. Justin's vocals sounding like Hell. They're pretty much growled throughout but like the other songs on the album, they're buried in the mix. It's an old trick and one that works effectively. The main riff is a bit repetitive but it does it's job.

Carrion - Stabbing riff with a nice drum beat and ferocious vocals. Definately a ferocious song. Not really much else to say as - if I'm honest - it's not as good as what's preceded it. Reminds me of Black Sabbath in places.

Imperator - Back to crooning over a sinister few notes and a very crunchy guitar refrain, the whole thing is like some kind of nightmarish road-roller. The rhythms slowly creep up on you and the guitars stab about the place. Things ease up into a more mid-paced section midway through the song but then it all goes nuts again. Then it's over...

Towers Of Emptiness - Bass intro before everything else takes over. Vocals are as harsh as ever. Fuck knows what the lyrics about. Possibly about the state of man and paranoia in general. More discordant guitar in the middle. Nice.

Forgive Our Fathers - Noise intro where it's bass rattling and feedback before becoming noisy song. Kind of like the last road out of Hell. Which pretty much sums up this album, It hasn't always made for comfortable listening due to the band creating an atmosphere which reeks of internal strife and extreme paranoia. Like bumping into an old mate and going for a beer or six, it's been a great night with this album. In the great Godflesh canon, this album is worthy.

Spotify - The Spotify version of this album is fucked at the time of blogging so you'll have to listen to it the old fashioned way...it's available on iTunes though.

(There are no music videos for any songs off this album, so here is "Crush My Soul" instead)
Unhinged from the brain of Unknown at 01:24