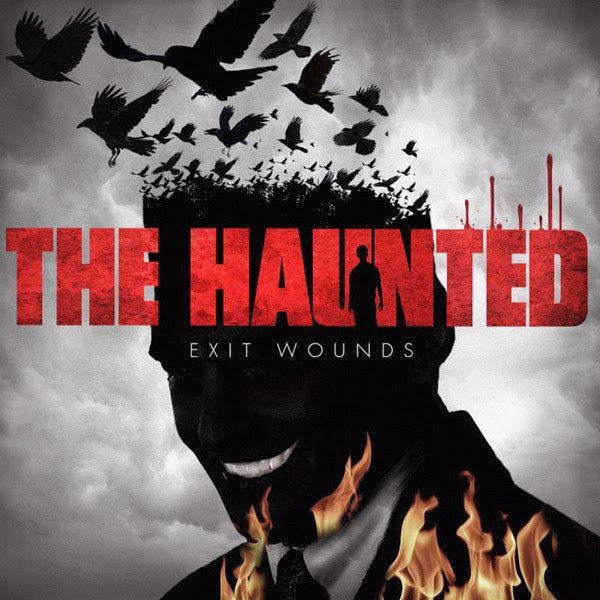 The Haunted are back. Whether this means anything anymore remains to be seen. Personally, I reckon the band stand to win back longtime fans who've been somewhat underwhelmed by everything after One Kill Wonder (Like me) as well as some new ones because, quite frankly, this album is fucking perfect. Before we talk about this quite frankly awesome slice of sonic warfare and late contender for my personal 'album of the year', let's go back in time a bit...

Forming in 1996 after the break-up of At The Gates (a band that most people seem to wank themselves stupid over although I never understood what all the fuss was about, even though I heard Slaughter Of The Soul - an album that may as well be the Holy Grail, Ark Of The Covenant and Spear Of Destiny all rolled into one given the way people talk about it. Yeah, it's a good album but there are better out there IMHO). After a couple of demos, they released the s/t debut. This created a bit of a storm as three of the members had previously been in At The Gates (Guitarist Anders Bjorler and his bassist brother Jonas as well as drumming titan Adrian Erlandsson). Joined by vocalist Pete Dolving and guitarist Patrik Jensen, they released an album which was great. When I first heard it, I thought it was great! It reminded me of when Slayer gave a toss and released quality music - something they haven't done since either 1990, 1994 or 2001 depending on your point of view.

Future releases would receive a mixed reception; partly because of quality issues brought about by personnel changes and the band just not writing as good as they used to. In fact, this band are on par with Soulfly in that you clearly have a talented group of individuals but they just couldn't hit their stride enough to make that one truely classic album, the real stand-out. It's a shame, but there you go.

This album marks the return of vocalist Marco Aro for the first time since 'One Kill Wonder', an album that was alright, I guess. It had 'DOA' on it. Adrian Erlandsson also returns, HUZZAH!!! Marco Aro was previously with Swedish hardcore/thrash mob Face Down who were a favourite of mine back in the day. Their gig at Trillians (A bar in Newcastle-Upon-Tyne) is one of my faves due to the awesome pit and stagediving antics! So when he joined The Haunted, I thought this would be cool, especially as previous vocalist Pete Dolving is known as "a bit of a character"...yep.

This came at a good time - thrash metal is popular again, arguably because of those 'retro' thrash bands like Municipal Waste, Bonded By Blood and (dare I say it) the insepid Gama Bomb. Bands who seem to focus on the mid-to-late 80's brand of thrash. The brand that most if not all of the original bands ended up straying from due to the musical stagnation that came about due to oversaturation. It's an extremely short-term genre but at least it got people talking about thrash again. This is where this album comes in - it's a pure thrash album that doesn't need a nostalgia trip to justify itself, it just uses some old fashioned fucking brutality.

Opening with one of those short instrumental pieces (317), it then launches into first proper track (Cutting Teeth) with a great level of ferocity. This is old-school thrash but not in the aforementioned way. The return of Aro is a blessing. The songs on here are all well crafted, and showcase the bands talents for remaining brutal but without sounding too samey. Whilst each song has the basic ingredients of speed and brutality, they manage to vary up the recipies for each meal in this particular banquet. One minute, they're sounding mid-paced and lurching on "All I Have", they then switch it to a beatdown of a song in "Kill The Light". "Trend Killer" is a fucking stormer. Straddling the best parts of punk, hardcore and thrash, it's fucking great! Everything is crafted to the point of perfection - bass is audible next to guitars, drums are pounded and vocals are shouted. But - and here's the thing - the production is perfect. Despite it having been perfected on so many levels, it's not sterile as one would expect. It still retains warmth and power. Like getting a hug from Brian Blessed.

The guitar solos on this album are great too. Managing to sound frantic whilst carrying their point across, they never verge on the distasteful.

When played live, the songs are guaranteed to whip up an awesome mosh-pit. Mind, one does have to question as to why they have released an new album when an At The Gates album is released at the same time? I guess that any shortcomings found within this album will be rectified with ATG and vice-versa. I'll be keeping an open mind on that and will get back to you, but I'd not rule this album out yet.

So, there you go. This album is possibly the finest example of thrash in a long time. I'd recommend it any day of the week.

Unhinged from the brain of Unknown at 00:46

ATTIWLTMOWOS used to be a review blog, but that has changed. There is nothing to download here - only previous reviews, there were no free downloads, only to either Spotify, Amazon or the artist themselves. Supporting artists was the idea with that one. All views given on this blog are only the opinions of the person who has written the blog and they are to be taken with a pinch of salt. If you disagree, that is your choice, just as it is the reviewer's when they post their thoughts and views. Also, any photos used are from sources such as Wikipedia or Amazon - we aim to get free images where ever possible. All copyright belongs to the person who painted the image, the photographer, the graphic designer, the artist/bands in question obviously and as stated above there are no illegal downloads linked to this page.

If you want to have something reviewed for Bearded Gentlemen Music or to have your music played on Across the Pond on Flytrap Radio, submission can be made at iisfoley1@gmail.com.