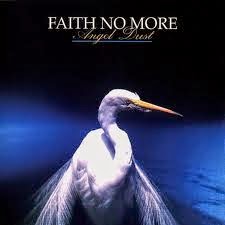 I must be brutally honest, as Funk and Alternative Metal goes I've never been a big fan of them, but with Faith No More, ever since I heard From Out Of Nowhere!!!, it's always given the urge to pick up my guitar, turn the Marshall Amp to maximum volume and strum all six strings and pretend I've got Roddy Bottum's keyboards ably backing me up on the introductory/verse parts. There's always a soft spot I find in myself whenever they get the occasional play on the DAB radio.

Hard to believe and obvious that many impressionable 16 year olds at the time would relate to, that The Real Thing (read the blog here on this link) has graced our ears for nearly twenty five years. Now I have heard it in full and I must say that Eddie Carter has been a tad harsh with his appraisal, especially after I heard a few early snippets with Chuck Mosley (a few arguments are forthcoming I suspect). And the likes of We Care A Lot wasn't much cop quite frankly. First, the singles Nowhere!!! Epic and Falling To Pieces might dominate the album, but for me they're a lot more encouraging and inviting than you might think. Overplayed tunes? Maybe Epic was back then, but many a band is never sold on one song.

FNM disbanded before the Millenium, after 17 years as an entity then regrouped ten years later. Since the reunion concerts they've gone off the boil in recently, that is until mid 2014 when Mike Patton hinted at doing "something creative." No doubt it's raised a few eyebrows, so soon as any hint of their material comes into the fold, we'll be certainly onto it. So in the meantime, I thought to take a nosey at this, Angel Dust, supposedly named after an analgesic recreational drug prevalent from the 1960s onwards. Mind you, I still can't work out why the band decided to have an egret on the sleeve even if it's a beautifully imposed work or art. Maybe it's just a matter of personal taste, but this is just as weighty and fresh over twenty years later.

If Faith No More were looking to take a more experimental approach, then I'm sure it's not a cop out, but there are one or two indicators on this album hinting at doing something different. For example R.V. has Jim Morrison-type poetry running throughout, which may have provided influences for Huey Morgan, slow and easy it feels like a wasting yet purple patch moment. Patton's running commentary throughout the song is just compelling, as well as Smaller and Smaller, a contrasting number. Seems to run on a similar chord and beat to Epic save for the top end shrieks in the chorus "Biiiiiiiiiiiiite!" However, the further the song progresses, the even more oddball the change in rhythm, and it's the same deal with a sightly down tuned Malpractice with some unusual riff approach. If you can envision some of the most improbabilities in life happening, this comes close in the structured songs.


Aside from the risk taking, there's also some more assured material, like the obligatory chanting in Midlife Crisis (which is what got me into Angel Dust from the start), the more clean and relatively straightforward Kindergarten. Be Aggressive is probably lyricist Patton's more bolder write ups coupled with some horror styled organ pipes in the beginning. Talking about ejaculation and swallowing is more than suggestive and nothing's left to the imagination, but I've still enjoyed listening to the song. A Small Victory moving towards the end is perhaps not their best showing here, lyrically, musically all feels very lightweight and not to the usual chaos so I'm not bowled over by it.

However, my faith is restored by Crack Hitler has a different choral approach "telephone call" feel about it, all good towards the end of Angel Dust, while the top end screaming returns on Jizzlober, and the hook changes all complement the entertainment factor. More organ pipes and a soprano group is an addition and perhaps an afterthought, FNM are clearly not afraid to diversify. The final two covers, Easy and Midnight Cowboy I don't find any real need for, but at least with the latter they've done a reasonable effort, so it doesn't really take the gloss off what I think is a seriously underrated album thankfully.

As I said earlier, it feels as fresh and ageless, but not all of it is perfect, in particular Small Victory, and the two cover tracks at the end, nevertheless it's a big step on The Real Thing. Here Mike Patton is finding good stride in his lyrical compositions, the vocal ranges from high bass to top end screaming and everything then was becoming more fathomable now. Of course they were the obvious singles showcase in Midlife Crisis and Everything's Ruined but you have to delve further into Angel Dust as substance goes, it's there alright.

9 out of ten. Almost perfect....almost.
Best track : Be Aggressive

Unhinged from the brain of Marc Richardson at 17:33