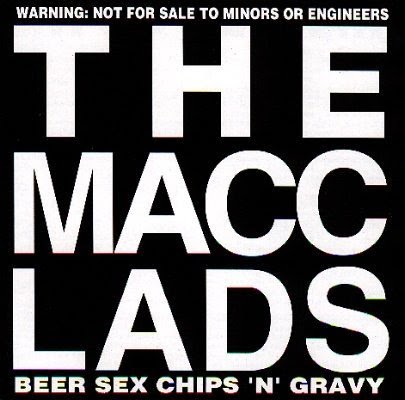 The musical equivalent of a Blue comedian (A la Bernard Manning, Roy 'Chubby' Brown, Jim Davidson) and one of the most offensive things I've ever heard. Un-PC and likely to offend a fair few people. Needless to say, I love it!

Hailing from the town of Macclesfield, The Macc Lads were a three-piece punk/hard rock band who had a cult following in the 80's and early 90's. Their songs tended to be about drinking (Most notably Boddingtons bitter), fighting, sex, takeaways and various other themes such as their mates (One recurring theme is a supposed mate of theirs called 'Dan' who gets into various scrapes which generally involve poo in some form or another). The band were considered controversial in the same way The Sex Pistols were and like that band, were also prevented from playing gigs in certain towns and cities in the country. It's all a bit tame these days though, especially when you have people like Frankie Boyle who go out of their way to be as offensive and as sickening as possible (And as a result, aren't that funny) yet get lauded for it and considered "edgy".

This album (And their other albums as well) is mostly punk/hard rock influenced and is competently played although sloppy in places and lacking any technical finesse. Production is ok for what sounds like a cheap recording (These days, cheap recordings can sound excellent, not back in '85 though). Word of warning, the songs could be considered offensive due to the colourful language used in them. If you're likely to be offended by a song called "Sweaty Betty" then it's probably not the album for you. There are worse songs if you look. The only downer is that the humour can get a bit repetitive so not every song on here is perfect. In fact, it was a major problem which meant the last album by these was dreadful. The worst sin in comedy is not developing and expanding on a brand of humour to match the audience and to keep them laughing and like the aforementioned Blue Comedians, the audience drops off save for a few diehards...

All in all, I like this as it's a good giggle. This album also provided the soundtrack to my 21st birthday so it's got sentimental value. I'd get this one, possibly the next one (Bitter, Fit Crack) and leave it at that.

This album isn't on iTunes (But most of the others are.
You can buy it on Amazon:  http://www.amazon.co.uk/s/ref=nb_sb_noss_1?url=search-alias%3Daps&field-keywords=The%20Macc%20Lads
It's not on Spotify but the first live album is and most of the songs off this are on that anyway. WARNING: If easily offended then stay away - http://open.spotify.com/album/2uezBpeahiaj86aklRnbx6
Unhinged from the brain of Unknown at 16:35