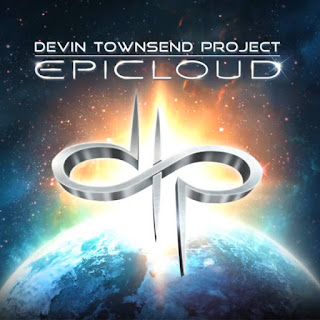 Every once or so often, comes a few acts that just seems to rub against the grain in the rat race of music. Of course, everybody dares to be different, trouble is the feeling of sameness seems to stagnate in many quarters, mainstream radio as a prime example. Now as I'm relatively new to this gentleman's field (though field as a term seems barely adequate), breathe in for the genres that Devin Townsend has dealt in - Extreme Metal, Thrash Metal, Grindcore, Industrial Metal, Progressive Metal, Death Metal, Ambient, Power Metal, New Age, Progressive Rock, Country, Electronic and Classical. It seems that he barely scratches the surface on all fronts, but his vocals range from screaming to opera-style. As versatility and his resume go, this is purely staggering.

In his many projects and collaborations, he has released twenty albums chiefly rooted in extreme metal and while showing no signs of slowing down after twenty years, The Devin Townsend Project is a huge departure from those roots. There is metal riffs still there, but it's more grown up, more contained and this latest album, Epicloud (DTP's fifth outing) is a statement of intent. However, the opening 44 second track, Effervescent, gives us no real idea of how DT wants to set out the stall. It weirdly kicks off with an acappella choir however beautifully put together it is. The combo continues with their backup vocals onto True North, but there are so  many chord and rhythm changes that we're left guessing where it will all end up. Following number Lucky Animals will no doubt be the most identifiable tune here with the chorus being the dominant force here.

Where we belong is an airy but solid Floydian number with Dave Gilmour-esque vocals, while Save Our Now continues on similar lines backed up by Anneke Van Giersbergen on pre-chorus and bridges. However, Kingdom brings in strong elements of Power Metal with urgent beats before the tone dramatically switches with the semi acoustic Divine. Then everything follows to the same alternating criteria for the remainder until Angel brings down the curtain with one or two distinctive guitar riffs accompanying the choir once more before they have the final notes on Epicloud.

This album doesn't run along any similar lines to any other album I've listened to in the last 5 years or so, and that's the whole point of it. In fact DT has stated that he wanted to write "a space opera" and his unique production skills of multilayering certainly highlight this. Unfortunately (or fortunately, whichever way you look at it), a few other four minute tunes were written in, perhaps inadvertently, so his space opera idea didn't quite go according to plan. Nevertheless, Epicloud is a beautifully engineered record which reminds me a little of Hawkwind. Only this time, I really don't think this is ever going to age disgracefully. M. Richardson 12/05/2013.

You can purchase the album here

You can listen to the album here on Spotify

You can follow all of Devin Townsend's activities here on his official website
Unhinged from the brain of Marc Richardson at 20:51